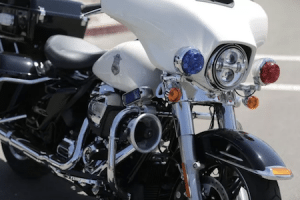 I have been riding and training on my 2013 Police Harley Electra Glide for some time now. I love this bike and work on it daily as a Motorcycle Police Officer. I am retiring this bike that now has about 30,000 miles on it, which is standard for the agency I work for. It will become a spare bike and mostly sit. I'm being issued a brand new 2018 Harley-Davidson Electra Glide Police Edition and I'm super excited. These Police Harley's come stock with a bunch of emergency equipment, wiring, and switches. We also have to customize them locally with radios and computers.

With a hydraulic clutch there are no adjustments at all. However, we are testing some aftermarket adjustable clutch levers for our police Harley's and are liking them. I will do a future video review of what model of adjustable lever we decide on, so stay tuned and make sure you are subscribed to our YouTube Channel.

My 2013 Police Harley is a pre-2014  Rushmore model. My 2013 bike shakes quit a bit, especially at idle. This new 2018 Harley is amazing and they got ride of a ton of shaking and vibration with the Milwaukee-Eight motor. The power increase is very noticeable too. I have already ridden new Police Milwaukee-Eight bikes and the transition will be fairly easy for me.  This bike is powerful and smooth.

Listen in as we give you an inside look and details on what it takes to get up and running with a Police Harley. It is quite a process before the bike is ready to hit the road. I actually stripped down the two new Harley's we got. I removed the fairings, seats, and fuel tanks to give our radio & computer guys access to equip the bikes. I will put the bikes back together when they are done.