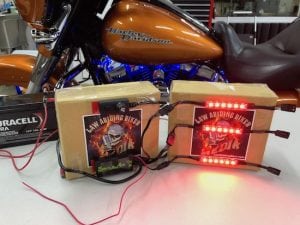 See my full introduction video to the new and improved Ciro 3D Shock & Awe 2.0 LED lights for Harley at the bottom of this article!

In the newest version 2.0 Shock & Awe Kit you get an upgraded Bluetooth controller box (brains) that allows more functionality to include a brake lead, voltage monitor, and 3rd channel.

And with the rollout of the updated Ciro 3D's Shock & Awe smartphone app (IOS or Android), you'll get things such as race mode, music mode, picture color mode, low voltage mode and microphone mode. And it still features the 21 different functions such as colors, flash, breathe/fade, paint mode and more of the original Shock & Awe kit that we're all used to!!

Note: If you have the older original Shock & Awe kit installed, all the original LED functions will work with the new smartphone app update. However, you'll need to upgrade to the new Shock & Awe 2.0 Bluetooth controller (brain) box to get the awesome new music mode, microphone mode, brake lead, voltage monitoring, and the 3rd channel.

With the new Ciro 3D Shock & Awe 2.0 LED lights for Harley, you can literally play music on your smartphone within the Shock & Awe app and the LED lights will flash to the tune! You can further customize a threshold so when the song gets to a certain threshold the LED's change to a color of your choice! You can do the same with the microphone function if say you're at a concert or sitting next to a friend that is playing music on his/her Harley. You can take a picture of a color with your smartphone camera and your LED's will match it! In the race mode you can check your quarter mile speeds just like a drag race all while the app and LED's are turning colors to let you know when to start and stop.

Adjust the settings within the smartphone app and you can have the LED's automatically shut down when your bike gets to a certain voltage. You can also set the LED to turn red everytime you brake regardless if you are running the LED's. And there is a third channel for adding things such as Ciro 3D front fork mounted LED illuminators or Ciro 3D under saddlebag extension LED's. With the 2nd and 3rd channel, you can control each of these separately and have them all different modes and colors! Your creativity is the limit with the new Shock & Awe 2.0.

The Ciro 3D Shock & Awe 2.0 LED lights for Harley has ultra super bright LED's that are easily affixed to a motorcycle with automotive grade 3M adhesive. The rotary encoder (brain box) can mount anywhere to control your LED colors and functions w/o the smartphone app, but only basic LED functions can be adjusted. 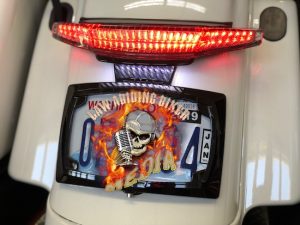 In this completely free tutorial video, we show you how to install a Ciro 3D Latitude LED Tail Light & License Plate Holder on your Harley-Davidson touring motorcycle. From the install to getting everything plugged in correctly, we have you covered.

There are two versions of this product: 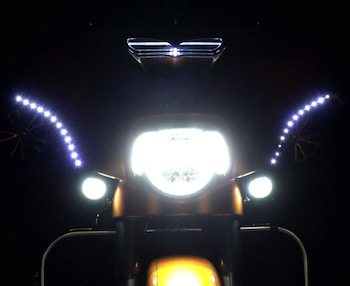 In this completely free tutorial video, we show you how to install a Ciro 3D Bat Blades LED white and amber turn signal lights on your Harley-Davidson touring motorcycle with batwing style fairing. From the install to getting everything plugged in correctly, we have you covered.

Make your fairing pop with the new Ciro Bat Blades! These innovative strips feature ultra bright white LEDs to work as daytime running lights and also amber turn signals on each side to be sure you are seen. 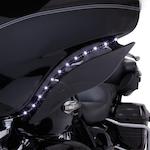 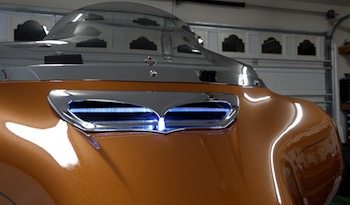 In this completely free tutorial video, we show you how to install a Ciro 3D Lighted Vent Trim on your Harley-Davidson touring motorcycle with batwing style fairing. From the install to getting everything plugged in correctly, we have you covered.

Ciro Lighted Vent Trim utilizes light pipe technology to create a one of a kind lighting effect on your 2014-up Batwing fairing vent. This piece will not affect the function of the OEM vent airflow. You can get the vent trim in black or chrome and either lighted or unlit. 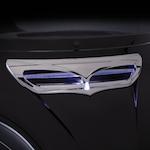 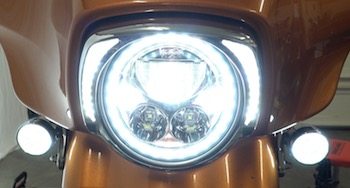 In this completely free tutorial video, we show you how to install a Ciro 3D Fang Headlight Bezel on your Harley-Davidson touring motorcycle with batwing style fairing. From the install to getting everything plugged in correctly, we have you covered.

Add some fangs to the front of your bike with the Ciro Fang Headlight Bezel. This new design is sculpted to perfectly fill the space around your headlight for a streamlined look. This will also keep the bugs and road grime from collecting in that deep gap around the batwing fairing headlight. This bezel also features custom fang shaped bright white running lights to really make your bike stand apart from the rest and ad additional light up front.  You can get the bezel in chrome or black! 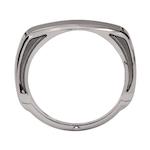 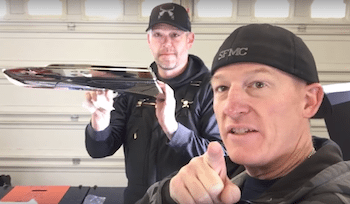 Podcast-We spent the day in the Law Abiding Biker™ Media garage filming more tutorial videos for later release on our YouTube Channel. We installed some awesome high-quality Ciro 3D aftermarket parts on a Harley Road Glide and Street Glide. All the parts we speak about in this episode are available in the Official Law Abiding Biker Store!

We get really specific on each of the parts we installed and give detailed information about them that will help you decide whether or not you want to install them on your ride! We also give you fitment & install information. Listen into this episode and get all the information.

SUPPORT US & GET CIRO 3D PRODUCTS IN OUR OFFICIAL STORE HERE!

We filmed each part install and will release each at a later time on our awesome YouTube Channel, so make darn certain you're subscribed and have notifications turned on. All of these awesome Ciro 3D parts are plug and play for an easy install and with the help of our DIY install videos, it'll be a breeze. You'll save a ton of money not having to pay a dealership to install them. And you'll have the pure satisfaction of working on your own motorcycle.

The Ciro 3D parts we installed include: 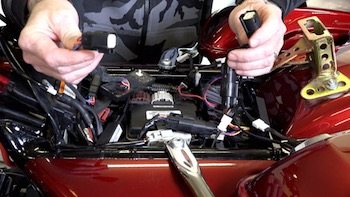 In this completely free tutorial video, we show you how to wire and install Ciro 3D LED rear run/brake/turn lights to your Harley-Davidson touring model. This includes Bag Blades, Filler Panel Lights, Saddlebag Extensions and Fang LED Signal Light Inserts. We also show you how to wire a Custom Dynamics Magic Strobe Brake Light Modulator so you can get a strobe effect when applying your motorcycle brakes. 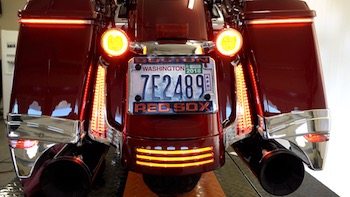 Ciro 3D rear LED lighting products can provide that additional lighting that catches the attention of that motorist behind you texting and not paying attention. That's a reality and you may not get a second chance if you get rear-ended on your motorcycle.