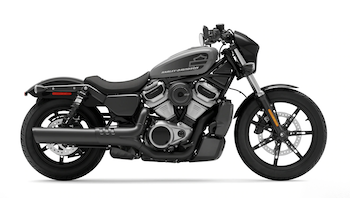 In this video, I discuss the new Sportster model named “Nightster” which was released on April 12, 2022, by Harley-Davidson.  This was a virtual event, titled “Instrument of Expression”.  The video starts out with a quote from Willie G Davidson and it says, “Everything we do is based on the notion that form follows function, but both report to emotion”.  Now, the video was highly produced and in my humble opinion, it lacked actual information about the new 2022 Harley-Davidson Nightster the average everyday rider would want to know.  So, in this video, I break it down and tell you what you need to know as a regular everyday biker about the event and about the new Nightster.

The video starts in Wauwatosa, Wisconsin at the Harley-Davidson product development center with Ben McGinley, director of design, Ashley Niemen, Lead styling and design, and Kyle Wick, Chief Engineer, going over the bike. Like the Pan America, Sportster S, the Nightster has the new revolution Max engine, but it's a 975cc version and they're calling it the 975t. The bike is built around the engine, making the engine part of the frame.  And like the other Revolution Max engine versions, it has variable valve timing.  You can run this engine out to 9,000 RPM.

The weight of the Nightster is only 485 lbs, which is 80 lighter than other Sportsters of today.  So, to cram that engine in a small frame and keep the iconic Sportster look the fuel tank is now the airbox and the fuel tank sits below the seat.  A benefit of putting the fuel tank below the seat is that it lowers the center of gravity of the bike making it feel lighter, better balanced, and more maneuverable.  Harley-Davidson increased the lean angle of the bike from 3-5 degrees on each side compared to other Sportsters.

The Nightster comes with three ride modes; Rain, Road, and Sport.  It comes with ABS and Traction Control that adjusts to each ride mode.  It also has drag slip torque control, and I was actually surprised they added all this ride technology to the Nightster, which is a Sportster model.

Harley-Davidson designed the Nightster with customization in mind which will allow builders and riders to make the bike their own.  One example is that they are using a separate riser system, allowing custom handlebar installs.  Harley-Davidson gave the following custom bike builders a Nightster to customize as examples of creative customizations:

LET'S TALK ABOUT SOME OF THE OTHER DETAILS OF THE NIGHTSTER:
The Harley-Davidson Nightster is equipped with a 19″ front wheel and a 16″ rear wheel.  The tire dimensions were selected to deliver nimble performance and distinctive style.  Both front and rear wheels are aluminum cast, satin black.  It's also coming with a small Sons of Anarchy front wind deflector.
The Nightster has exposed rear shocks modeled after previous Sportster chassis that provide an iconic style line to the rear of the motorcycle. It is coming with a 6-speed transmission.  The fuel tank under the seat has a 3.1-gallon fuel tank and Harley-Davidson reports the Nightster gets an estimated 52 mpg.  The exhaust is 2 into 1 and sits low on the right side of the bike.
The all-new Nightster is coming with an LED headlight, taillights, and turn signals.  It's coming with 41mm Showa Front Forks.  It has a single brake rotor on the front and rear.  The Nightster has a four-inch viewable round-shaped analog speedometer gauge and all the other information is displayed in a digital format with a segmented LCD.
Now, this is a water-cooled engine and there is a large radiator sitting in front.  I've personally never been a fan of this look, but with these new high-performance engines, I think it's the future for Harley-Davidson and something that we're all going to have to get used to.

The bike comes in three colors:

Harley-Davidson is flying me down to southern California near the end of April to test ride and review the Nightster.  Get subscribed to our YouTube channel to be notified when I release that video.  Also, while down there, I'll be test riding the new Low Rider ST and will release a video on that.  Oh, and Harley-Davidson is shipping us a Street Glide ST and letting us keep it for a month, so we'll be reviewing that bike also.

All and all, I'm impressed with the Nightster and I think Harley-Davidson did a great job building and designing this new age Sportster. But as always, the true test will be when I get to see it in person and test ride it.