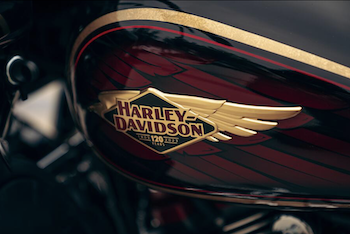 On January 18, 2023, Harley released seven new anniversary editions, two new models, and they’re bringing back the Breakout.  Now, I’ve wrapped up everything I learned and put it into a nice package for you in this video. I have a ton of information for you, and I’ll tell you what you actually need to know as a consumer and give some opinions along the way.  (see video below)
We're excited that we were selected, as one of only two YouTube channels, by Harley and given all this information about a week ago and placed under an embargo until today.
The Harley-Davidson 120th Anniversary Homecoming Celebration Event is scheduled for July 13-16, 2023, in Milwaukee.  Harley informed us that this will become an annual event in Milwaukee.  Homecoming events will take place at venues across the Milwaukee area facilities and who knows, maybe we’ll see ya all there.

The first six of the seven total anniversary models share a unique paint scheme which is described as Heirloom Red Paint with a Midnight Crimson Fade and highlighted powertrain components. These models will have oxblood-colored inserts on the seats.  And, the anniversary models sharing this paint scheme are the Ultra Limited, Tri Glide Ultra, Street Glide Special, Road Glide Special, Fat Boy, and the Heritage Classic

The seventh anniversary model is the CVO Road Glide Limited, being the only anniversary model with the larger 117 Cubic Inch M8 engine.  Its paint is a bit different and can be described as Anniversary Black and Midnight Crimson fade. And when viewed in the sun there is a red highlight to the black.  A subdued eagle split up between the fairing, tank, and bags.

The Breakout is returning to the lineup with that beautiful Milwaukee-Eight 117 V-Twin engine.  This bike will have a very wide rear tire, coming in at 240mm, a 5-gallon gas tank, and a 36-degree front rake, which makes it a long, low, wide, modern cruiser.

The Nightster Special is the next new model for 2023.  What’s so “Special” about this new Nightster?  To start, it has a passenger pillion and footpegs to allow two-up riding.  The handlebars and risers move the bars up and back for a more commanding rider position.  It has a four-inch round TFT display, replacing the analog speedometer and segmented LCD indicators, allowing for BlueTooth connectivity and navigation.  The Nightster Special is coming standard with cruise control, USB charging port, and you can add heated grips.

This new model is going to be a surprise for some. And for many out there, it is a long time coming.  It is the all-new Road Glide 3 Trike.  I’m going to say right up front that even if you’ve never been interested in trikes, this one is sure to turn your head a bit. Many riders have requested a Road Gide Trike for years now and it looks like Harley made it happen.  A lot of engineering went into making the first Harley trike with a frame-mounted fairing including things like the placement of the fairing to accommodate the long rake and steering dampening of the trike.