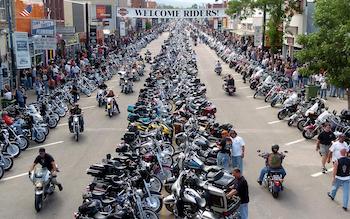 With COVID-19 keeping some bikers from attending the 80th Anniversary of Sturgis, it clearly didn't stop most. The SD Department of Transportation released attendance numbers based on traffic counts, which may surprise some who predicted low attendance numbers of only 250,000. (see video below)

The city of Sturgis uses traffic counts as part of its formula to calculate attendance each year. Other pieces include the amount of garbage removed over 24 days, as well as a formula that divides the downtown into sections to determine crowd sizes.

From August 7 through 16, 2020, a total of 462,182 people attended the event according to traffic counts from nine entry points. That’s about 37,000 fewer than last year’s 499,654, or a 7.5% decrease. It was an anniversary year for the Sturgis event and I think it's fair to say the numbers would have been much higher if COVID-19 was not in play. Attendance numbers on anniversary years are usually much higher. So, the 2020 event attendance numbers more closely reflect a standard event year.

Early reports from vendors show increased spending from attendees for 2020, although final numbers aren’t available yet. Fewer attendees for 2020 were in the 60 to 70 age range, which is the age group that has been most vulnerable to COVID-19. 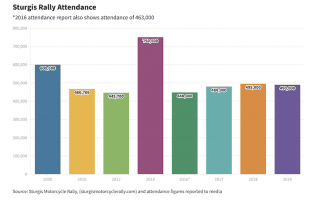 attendees was up and they were very pleased. Several went on to say that their sales figures were even better than during the 2019 Sturgis event. This means that although attendance was slightly down, the bikers that did attend were willing to spend money. This is all great news for the economy of Sturgis and surrounding areas that heavily rely on income from the event.