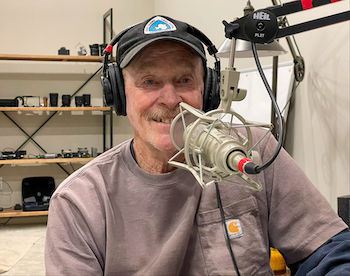 I had the pleasure of interviewing Patron Member Terry McDonough of Medford, Oregon. We had such a good time that we split the conversation into a two-part podcast series, so make sure you listen to part 1 and part 2 in order, so it all makes sense.

Terry is another great example of the supportive biker community that surrounds Law Abiding Biker™ Media. He supports us financially as a Patron Member so we can continue to help, educate, entertain, and inspire as many bikes as we can worldwide.

There are many benefits to becoming a Patron Member and one of them is being able to attend ride and meetup events, such as Terry did in Sturgis this year. Terry has some unique skills having worked with sheet metal for years. He asked me why I hadn't put sheet metal tops on the workbenches in the Law Abiding Biker Shop. He noticed in the videos on our YouTube channel that we have wood tops. During our conversation, he offered to shape and create sheet metal tops for the workbenches and I was humbled by the offer, to say the least.

So, this fall Terry came all the way up from Medford, Oregon to Yakima, Washington where the Law Abiding Biker Media Shop and Studio are located. This is a 7 hr drive and he simply measured the workbenches but we got to hang out and talk.

Weeks later, I drove to Medford, Oregon to Terry's sheet metalworking shop and filmed the process of him bending and creating the 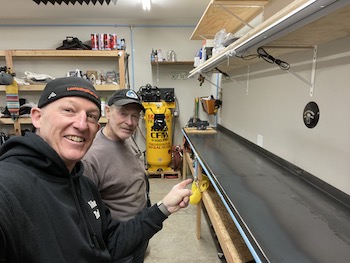 bench tops. I will be releasing a full documentary film on the entire process, so make sure you're subscribed to the YouTube Channel, so you know when it releases.

Last, Terry drove back up to the shop with the metal workbench tops and installed them. Wow, they look great! And this was all donated by Terry. I'm am so grateful and humbled by his kindness.

Of course, while I had him in the studio, we sat down and did a couple of podcast episodes. Not only is Terry good with sheet metal but he has a ton of experience with motorcycles. And he shares some unique experiences he's had while working in Antarctica.