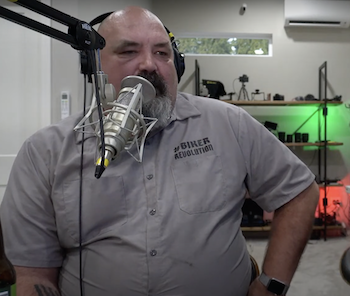 I had the pleasure of interviewing Patron Member Brad Johnston of Redmond, Oregon. Prior to recording the podcast, we had spent the day in the Law Abiding Biker shop filming a rear Rockford Fosgate speaker install on his 2017 Harley Road Glide Special. That video will eventually release along with other stereo install videos here!

Brad is another great example of the supportive biker community that surrounds Law Abiding Biker™ Media. He supports us financially as a Patron Member so we can continue to help, educate, entertain, and inspire as many bikes as we can worldwide.

There are many benefits to becoming a Patron Member and one of them is being able to attend ride and meetup events, such as  Brad has several times. In fact, Brad hosted a Patron Member ride in Oregon in 2020 and I produced a documentary film on that ride titled, Riding Motorcycles in Real America!

Lurch and I had a great time talking with Brad, who is a retired law enforcement officer. In fact, he rose to be the Chief of the Astoria, Oregon Police Department. After retirement, Brad took on a new career of teaching but he still finds plenty of time to ride his Harley local and long-distance. He is very involved with the Patron community in the Private Facebook Group and we love having him as a member.