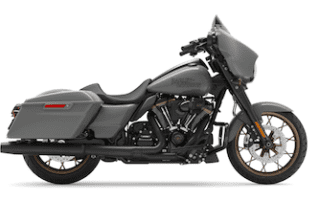 In this episode, we talk about the new Harley Davidson Street Glide and Road Glide ST models. These bikes were released to the public on January 26, 2022, when Harley released a video launch of the entire 2022 model line-up.

We had the opportunity to talk with Harley representatives, Paul James, Bjorn Shuster, and Eric Buckhouse of Harley- Davidson.

Paul James has worked in powersports his entire career, working as a journalist in the snowmobile industry, in marketing at Arctic Cat, Inc. (snowmobile, ATV, and PWC) and for the past 23 years at Harley-Davidson. Paul has held a variety of roles at H-D, including Marketing/PR, Events, Product Planning, and Go-to-Market. He is currently Sr. Manager Public Relations and is an avid motorcycle rider and racer.

Eric Buckhouse, Engineering Technical Lead, has worked for Harley-Davidson for 25 years in various roles in engineering and Parts & Accessories, with the majority of time in full vehicle product development and in Custom Vehicle Operations. He graduated from Marquette University with Bachelor's Degree in Mechanical Engineering. He served as Project Engineering Lead for more than 35 different motorcycles, including Cycle World Best Cruiser awarded motorcycles – 2005 CVO Fat Boy and 2016 Low Rider S.

Bjorn Shuster, Styling Manager, has been with Harley-Davidson for 6 years. He has worked in the design industry since 2006, and his first motorcycle design experience was with Cobra as a freelancer in school. He worked in automotive design at GM in the exterior design studios of both Cadillac and Hummer, then transitioned to motorcycle design in 2011 when he moved to Austria and worked for the design agency which handles KTM/Husqvarna (Kiska GMBH) as well as supporting several other motorcycle brands. He also worked a stint at Polaris for motorcycles and ORVs before joining Harley-Davidson in 2015.

If you want to learn everything there is to know about the new Harley Street Glide and Road Glide ST then listen in to this podcast episode.