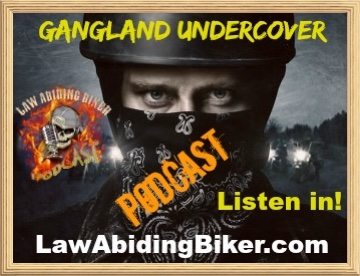 PODCAST-In this episode we dive deep into the History Channel's new 6 part television series Gangland Undercover, which premiered on February 24, 2015. As a law abiding biker/motorcyclists you may be wondering whether or not you should dive in and watch this television series? We break it down for you and whether you should spend your time doing so. We separate fact from fiction, so you have the right mindset going into the television series, so listen in on this one!

This Gangland Undercover drama series is a fictionalized retelling of the story of meth dealer-turned-ATF informant Charles Falco, who spent three years inside one of America's most dangerous motorcycle gangs, the Vagos. Although Falco originally took on the assignment to avoid spending 20 years in prison on drug charges, it eventually evolved into a quest for justice for him. “Gangland Undercover” documents the lives of outlaw bikers, who live in a world in which respect is earned through fear. The series is based on Falco's memoir, “Vagos, Mongols, and Outlaws,” and documented historical research of gang rivalries.

There is a book out and if you are interested in it, please consider using our affiliate link to purchase on Amazon.

Show your support with a flat donation!

VIDEO OF INTEREST: Inside the world's deadliest biker gangs