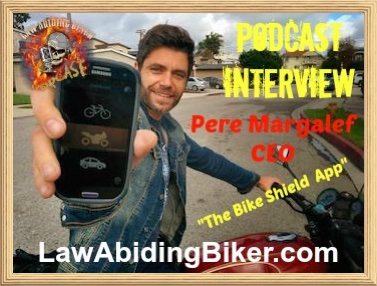 PODCAST-In this episode I interview Pere Margalef, who is the CEO of The Bike Shield App. It is an app created to help protect bikers, motorcyclists, & bicyclists from common collisions & to make other motorists aware of these modes of transportation around them. Pere is a mechanical engineer full time and this is a passion project for him on the side as you will learn in this interview. The Bike Shield App is available for IOS and Android and is free. More can be found at their official website: www.thebikeshieldapp.com

We spoke heavily of the Bike Shield App on Law Abiding Biker Podcast Episode #76, so take a listen. After that episode aired, Pere got ahold of us and wanted to do an interview. You must listen into this interview as it is jam packed with useful information that has never been heard before. It is a complete behind the scenes  look at The Bike Shield App, the team, and it's future.

The way the app works is that a driver of a car and a rider on a motorcycle both have to have the app installed and running. The driver of a car is then alerted when within a certain distance of  a motorcycle or bicycle, warning them to be on the lookout. Remember, drivers of cars have blind spots and may not see a motorcycle, so the alert would be very helpful. The app has other functionalities such as an users map, which lets you visualize other users around you to establish safe routes.

I learned Pere is a biker and currently rides a motorcycle and resides in the Los Angeles, CA area. He moved to Los Angeles about ten years ago from Barcelona, Spain. He came up with the idea for the app when he had a close call while riding his motorcycle in traffic. He has invested much money and time into developing this app to make us all safer and now has a small team working with him to further develop it.

Pere got the app out and into circulation as a minimum viable product. That is when the real testing started and they are learning what works and what doesn't. They are planning on releasing new versions as the app is worked on behind the scenes. They are working on new algorithms for things such as how often the alert sounds when multiple bikers are in a small area. There is some super exciting stuff in the works and Pere reveals it all in this interview.

They have developed the APIs to open their Bike-to-Vehicle (B2V) communication channels to other road apps. That includes apps for bicyclists, bikers and car drivers and that is the direction and future of the app. Working with car manufacturers to have it built in standard to on board infotainment and navigation systems will be crucial. We spoke about the Harley Davidson Boom Box Infotainment system that is standard on touring models now and what a great fit that would be. Don't forget to check out our #1 rated Boom!™ Box Infotainment System Tutorial Videos!

There are some great developments with the app such as the recently launched program MiBici from Guadalajara (Mexico), which is the World's first program to incorporate the BikeShield in its own app, becoming the first World’s bike share program with a B2V system. It is expected that by the end of the year, the program will have 20,000 users. They are also in conversations with Mexico City, Barcelona and Santiago de Chile. They want to do the same in your city.

What is The Bike Shield App: (directly from their website) 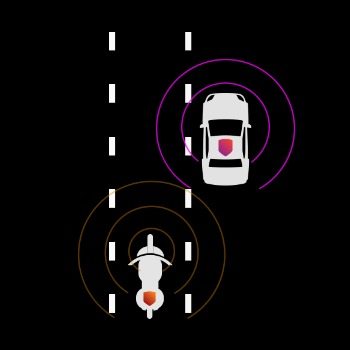 All good things take time and we certainly support the continued development of this platform. It could definitely be great for bikers if wide acceptance and use happens. We know it is the early stages and we will follow along. Having observed many injury and fatality motorcycle collisions I fully support the Bike Shield App.

Pere says the best thing that bikers can do is telling your family and friends about the app. And to give them feedback, suggestions and critiques of the app as it moves forward in development and implementation. You can do so on their contact form directly on their website: www.thebikeshieldapp.com