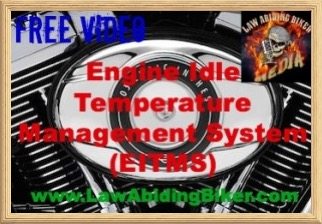 VIDEO & BLOG-Are you confused or want the real scoop on the Harley-Davidson Engine Idle Temperature Management System (EITMS). Want to know if your Harley is equipped with it? There is confusing and less than useful information out there, so we broke it down for you and made a free tutorial and explanation video. We wanted to break it down in a format that makes sense to the law abiding biker out there.

EITMS can be used by any rider, but is specifically for those riders who frequently find themselves in riding conditions where the vehicle is subjected to prolonged idle conditions or traffic congestion, the motorcycle is equipped with an Engine Idle Temperature Management System (EITMS) to provide limited cooling of the rear cylinder.

EITMS will activate (rear cylinder will turn off) when all of the following conditions are met:

EITMS will disable (rear cylinder will again fire) if any one of the following occurs:

When the engine is in EITMS operation, you may notice a difference in idle cadence. Additionally, there may be a unique exhaust odor. These are both considered to be normal conditions.

Enabled: The EITMS engine cooling feature will automatically activate whenever the vehicle comes to a complete stop and is idling during elevated temperature conditions. When the feature is enabled, it may not activate under cool riding conditions.

The EITMS feature is not active under any conditions.

EITMS can be enabled or disabled by performing the following procedure.

If you have a 2014 or later model with the Boom!™ Box Infotainment System, you can push the “information” toggle in the right control cluster. On the Boom!™ Box screen it will show you air temperature, oil pressure, and whether the EITMS is enabled or disabled. Note: you can do it the way described above to.

Want to know everything about your Boom!™ Box System and the true capabilities?