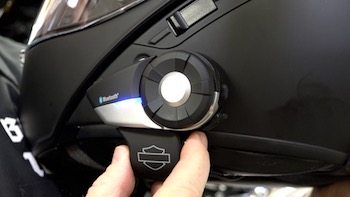 I teach you how to setup and utilize the Harley branded Boom! Audio Sena 20S EVO Bluetooth Headset with your Boom!™ Box Infotainment system in this completely free video! With the Harley branded Sena 20s EVO Headset, you get full Bluetooth wireless integration with the Boom Box system, which comes on 2014 & newer Harley touring models. That means you can hear everything going into your Boom Box and everything coming out. Music, radio, GPS turn by turn, voice commands, phone calls, intercom with a passenger, and CB are just some of the things that are integrated. You will also need an additional WHIM, Wireless Headset Interface Module, installed and attached to your Boom Box. See below on this page for the headset tutorial setup video.

So, if you're willing to pay the Harley-Davidson tax, they'll gladly accept your money. You can get into a single Harley branded Boom! Audio Sena 20S EVO Bluetooth Headset for $300 and a pair of them for $550. Of course, this headset is only sold by approved Harley-Davidson dealers.

Let me explain further about the “Harley-Davidson Tax”. You see, Harley-Davidson & Harman Kardon, the maker of the Boom Box, really screwed up from the beginning back in 2014 by not building the system to pair “directly” with a wireless Bluetooth headset. Let's keep in mind that direct Bluetooth headset pairing was old technology in 2014 and they still didn't build it in.

So, after years of customer complaints and frustrations, Harley decided, as usual, to pass their huge 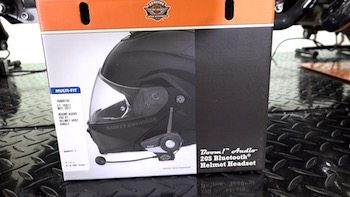 mistake onto the customers, never admitting any fault.  Harley created the WHIM, Wireless Headset Interface Module, as an add-on item customers could purchase for $300 and another harness for $50 that some models will need. Then they push for you to have the dealership put it on and charge you for the install. Really, I'm not making this up and it seems unreal.  By installing the WHIM, you'll be able to pair the HD branded Sena 20s headset to the Boom Box. Interesting though, because the Sena Freewire has been out for years now and already does this without a WHIM, but we'll get to that a bit later.

And if that wasn't enough Harley taxes, they took it even a step further. To get full HD “stereo” sound you'll have to buy the Harley branded (stamped) Boom! Audio Sena 20S EVO Bluetooth Headset. You may get other Bluetooth headsets to pair, but you'll only get mono sound and it sounds terrible, trust me. Yes, Sena makes the HD branded 20s EVO headset and no, the regular non-HD branded Sena 20s will not get stereo sound. So, you're now forced to buy everything from Harley to fix their direct Bluetooth pairing problem.

Honestly, I would have never purchased any of these items from Harley, but only did so to test it for all you Bikaholics out there that requested I do so. There's no way I would have given that much money to Harley to fix their screw up. But, to help the community I did so. 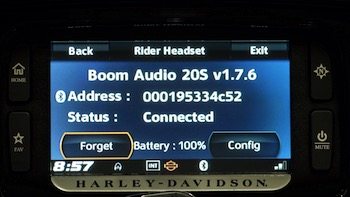 Once the WHIM is installed on your Harley and you have the Harley branded Boom! Audio 20S EVO Bluetooth Headset(s), all works very well. It all integrates nicely. The sound is that of what you'd expect from small speakers in a helmet headset. All worked well during my testing and I have no real complaints other than what I mentioned above.

So, if you've got some money to throw at Harley to fix their mistake, then go for it. You won't be disappointed with the performance of the WHIM or of the Harley branded Boom! Audio 20S EVO Bluetooth Headset. Pay the Harley taxes!

Better Alternative/Sena Freewire: (what we mostly use here at Law Abiding Biker Media instead of the WHIM)

We here at Law Abiding Biker Media still believe the Sena Freewire ($250) is a much better option, as it is cheaper and you'll get stereo sound even with regular non-HD stamped Sena headsets you may already own. And you'll get stereo sound with other brand wireless helmet headsets. With the Sena Freewire, you also get full Boom Box integration and rider/passenger communications just like the WHIM.

Important info for riding with a passenger: Freewire vs. Whim

With the single WHIM, you can run two Harley branded Boom! Audio 20S EVO Bluetooth Headsets. With the Sena Freewire, you'll need one module for the rider and one for the passenger. You'll need to install a 7-pin DIN coms port for the Freewire and we have a free video on how to easily do that. So, the cost analysis will be dependant on your needs and if you already own non-HD branded Sena 20s headsets you want to use. Everything must be taken into consideration.

Question: Will my regular non-Harley branded Sena headset work with the WHIM?

Question: Will another non-Sena headset work with the WHIM?

Question: Can't I just get the Sena/Harley headset software from the Harley website and then upload it into my regular non-Harley branded headset, so it will get stereo sound.

Answer: No. You can certainly upload that software on the Harley website into the regular Sena 20s headset and it will accept it and work fine, but you still won't get stereo sound. Again, the only way you'll get stereo sound is to buy the Harley branded Boom! Audio Sena 20S EVO Bluetooth Headset.

Or support us via a flat donation:

What are we going to do here at Law Abiding Biker Media? FREEWIRE OR WHIM?

We here at Law Abiding Biker Media will stick with the Sena Freewire. It gives all the functionality of the WHIM at a fraction of the cost. And best of all, it works in stereo with all the great Sena brand headsets we already own!