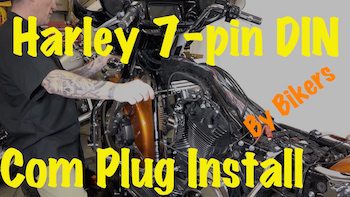 Video-In this free video we show you in great detail how to install a 7-pin DIN audio & communications kit or plug on your Harley-Davidson touring model. Models such as the Harley Ultra Classic or Ultra Limited already come set up with this 7-pin plug. However, models such as Harley Street Glides and Road Glides don't come stock with it.

The biggest benefit to installing the Harley 7-pin DIN is so that you can then use an aftermarket wired headset (see products below) in conjunction with your stereo system on 98 to current Harley-Davidson motorcycles!

Give voice commands directly to the Harley-Davidson Boom!™ Box Infotainment System such as directions, tune to radio stations, make a phone call etc!  And, if you and your passenger are equipped with a wired headset you can communicate with each other!

There are currently NO Bluetooth wireless headsets that pair “directly” with the Harley Boom!™ Box Infotainment System. There are some workarounds such as the Sena Freewire that adds wireless Bluetooth headset capabilities to the Boom Box. 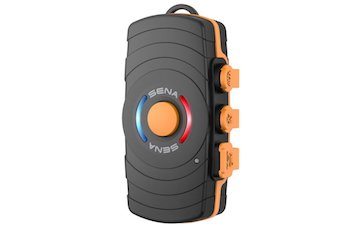 CHECK OUT THE SENA FREEWIRE BLUETOOTH WIRELESS/HEADSET  SOLUTION THAT FULLY INTEGRATES WITH THE BOOM BOX INFOTAINMENT SYSTEM! (SEE VIDEOS THERE)

Our #1 Recommended Wired Harley Headset of Choice for half helmet, full face helmet, 3/4 helmet, and modular helmets (The best & most affordable option for full headset/Boom Box functionality & a fraction of the price of a headset with “Harley-Davidson” stamped on it)

If you are someone who only buys things that say “Harley-Davidson” then here are your more expensive options.

If your Harley touring model, such as a Street Glide, Road Glide etc, doesn't come stock with the 7-pin DIN plug, you can easily purchase and install an add-on kit. Then you can utilize a Harley-Davidson wired headset!

Guide Only: Make certain you get the right kit for your year/model

There is no available kit. Only those Harley touring models that came factory with the 7-pin DIN.