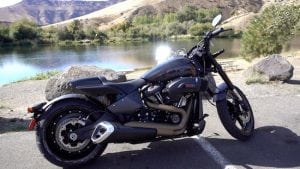 I got to spend some time reviewing and riding the 2019 Harley-Davidson FXDR 114. It rides great considering it has a 240 mm rear tire on an 18” wheel. The 19” front wheel with a 120 mm wide front tire works well with the rear tire size. The new cast aluminum swingarm and inverted front forks with cartridge dampening both round it out to make a good cornering motorcycle. I was actually very impressed with its abilities.

The riding position on the FXDR is typical for a shorter distance performance motorcycle. This is not a long distance bike to say the least. I’m 5-08 and had to choke up quite a bit towards the fuel tank to reach the handlebars. There is no adjustment on the new forged aluminum clamp on style handlebars. However, you can put standard aftermarket handlebars on the Harley FXDR 114 and it has mounting points for that.

I did get a lot of feedback through the handlebars in regards to vibration, but nothing that is a deal breaker and sort of expected on a performance type bike like this. The dash is all electronic to include a digital tachometer.

The FXDR has the Milwaukee-Eight 114 motor (1868 cc) and produces 119 ft lbs of engine torque. It will throw some heat up at your legs so be aware of that.

Standard with the FXDR is an LED headlight, signals, and taillight. The Harley FXDR 114 comes with a 6-speed transmission, cable clutch, and comes standard with ABS. It’s equipped with a 4.4 gallon fuel tank and Harley says it gets an estimated 46 mpg.