Another Free Video By Bikers For Bikers!

Other Useful Free Videos-Work on Your Own Motorcycle! 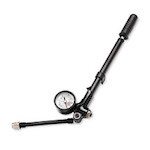 Here is an alternative that works just the same and is cheaper on Amazon:

Never use an air compressor to adjust your Harley Davidson suspension/shocks. Doing so can ruin your suspension system and is too powerful.