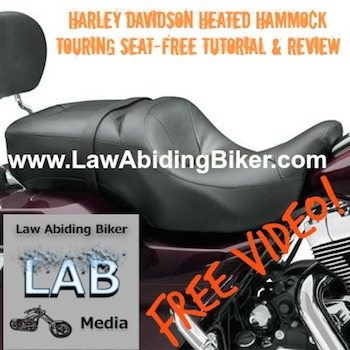 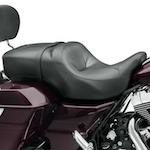 There are a couple of things you should consider or might want to know before  taking the full plunge into ordering this very expensive Harley touring seat. I am 5′ 8″ tall and a Harley Street Glide fits me just perfect and does for others in this height range. Because this seat is thicker I estimate that I sit about 1″ higher than with the stock seat. Additionally, the Harley Hammock has a higher back and is more concave (bucket like) it pushes you forward a bit. This is actually a better riding position to control the Street Glide, as you are more centered. You will notice all these things when you put the seat on for the first time. I like the riding position and I can still touch with both feet almost flat when stopped. The Harley Hammock is so very soft and comfortable compared to my 2014 stock Street Glide Special seat.

Of course the Harley Hammock seat is heated for both the rider and passenger and has separate controls on the left side of the seat (rocker type switches). You will need to find the dead head power port by the diagnostic port under the left side panel and route the Touring Electrical Connection Update Kit (Harley Part #69200722) when installing the seat, but my video shows you exactly how to do this. 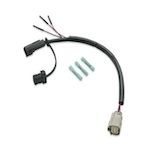 If you decide to order the Harley Davidson Hammock Heated Rider and Passenger Touring Seat (Harley Part #52000127) after watching this video & reading this blog, just make sure you order the Touring Electrical Connection Update Kit (Harley Part #69200722) with it, because you will need it for the installation.

My stock 2014 Harley Davidson Street Glide Special came with the 6″ wind deflector. Because the Harley Hammock seat raises me around an inch, I purchased an 8″ wind deflector to make up the difference and still be a bit protected and I am very pleased with that decision.

I had already installed a Harley Davidson detachable rider backrest on my 2014 Street Glide Special. I found that other Harley touring seat manufacturers mostly sold seats without the slit to allow my detachable backrest. They wanted to sell me a seat with their own folding backrest built in. So, of course their seats cost more for this reason. This is the reason I went with the Harley Hammock touring seat and of course because I had already sat on one and really like it.

Of course the Harley Davidson Hammock Heated Rider and Passenger Touring Seat (Harley Part #52000127) is of true Harley Davidson quality and I don't anticipate this seat will break down any time soon. Oscar has been running his Harley Hammock seat for quite some time now and he says it gets even more comfortable after putting some miles in.

I love this seat!

I must say that I have ridden using this seat about 3,000 miles and I absolutely love it. I really have nothing bad to say about it. It is super comfortable, puts me in a better riding position, and is a must have for those really long riding days. I did not get the pressure points and pain as I did when using the stock seat on my 2014 Street Glide Special. The heat is super nice on those colder rides with both high and low settings. When I have a passenger they too love the comfort of this seat and the heat.