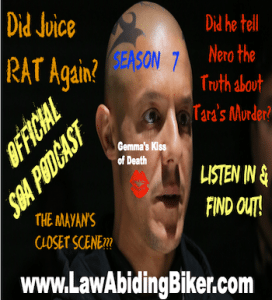 The slaughter at Diosa by the Chines has certainly set the club back. As if Jax was not already angry enough, now he has every reason to go forward with reckless disregard.

Chibs and Sheriff Jarry are getting close and personal. The question is if Sheriff Jarry is actually on the take or if she is working a case. Is she taking the money or is she setting SAMCRO up for a large scale RICO case?

We are patiently waiting to find out who gave up the location of the guns to the Chinese. We have strong reason to believe it was Jury, the Pres of the Indian Hills Chapter, because we know one of men Jax and crew killed must have been close to him. It is all to possible that Jury is working with Berosky, who may also be involved with disclosing the information to the Chinese.

Nero is in the thick of it. Jax finally reveals to him that he believes the Chinese killed Tara. Of course the only witness is his beloved Gemma. Mayan's President Marcus Alvarez takes temporary custody of Nero and they lock him in a closet. That is because Nero failed to disclose information to him.

We know Juice did not have the balls to kill Gemma after they ended up in a desolate area. Gemma ends up walking to a Cafe and later meeting up with Wendy and Unser. Juice robs a convenience store and then ends up at the Mayan's Club House. He is trying to get safe passage to Mexico in return for giving information about SAMCRO to Marcus Alvarez, the President of the Mayans. Alvarez will have nothing to do with it and notifies SAMCRO, who later take custody of Juice. But not before Juice gets locked in the same closet as Nero and they talk. The huge question on everyone's mind is, did Juice tell Nero that Gemma murdered Tara?

Lynn is set up by both Nero and Jax and shows up at a warehouse where they are prepared to slaughter SAMCRO. Instead, it is just Jax and Chibs present. Lynn takes them away in a van after a deal is made. However, they never make it and SAMCRO is waiting for Lynn and crew. Jax and Lynn get into a fight and some dirty Stockton police on Berosky's payroll show up. Lynn and crew are taken into custody on gun and drug charges while SAMCRO is let go.

Jax talks with the Grim Bastards about possibly “patching over”, which even they are dumfounded by. The Grim Bastards finally take out Delanynee, who was responsible for killing one of their members sometime back. They have been trying to track him down every since and now he is out of the picture.

The Aryan's leader is Tully, who is in jail. Leeland is taking up business on the outside and SAMCRO isn't getting along with them very well. A huge fist fight breaks out, but Jax later makes it up to Tully buy offering him 1/2 the drug trade in Stockton after Jax made a deal with Marcus Alvarez in exchange for Juice.

Deputy Egly is now awake after being shot by Leeland and crew several episodes ago. SAMCRO was also present, but did not do the actual shooting. However, Egly saw all of them and is now in a position to speak. We will have to see if Egly protects the club or dimes them out.

We see a preview of upcoming episode 7. We see some Honda police motorcycles getting shot up. We see Juice back in his SAMCRO vest “cut” and being chased by police on a motorcycle in a pursuit. We see another scene where it appears Jax is handing Juice's vest back to him in front of a large rock that is spray painted with “J.T. 11-13-93”. In front of that rock Juice says, “I'm sorry”. Happy is seen telling Gemma that she needs to come with them to the cabin for “club business”. Unser is with Jax and says, ” I need your word”.

To get all the finer details, insights, and predictions you really need to listen in on this Law Abiding Biker® Podcast episode.