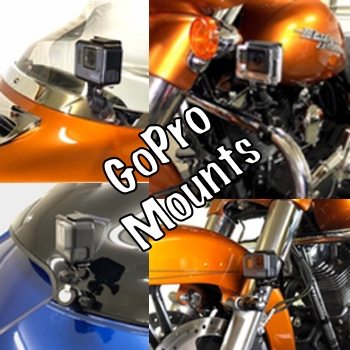 We have reviewed and tested many American made GoPro action camera mounts for Harley-Davidson and have compiled the best for you. Some of the criteria we used were quality, materials used, ease of mounting, ease of use, looks, and steadiness of the shot. 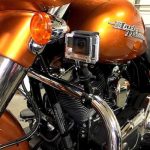 First is the Biker GoPro Gripper Universal 7/8″ to 1 1/4″ Round Bar Mount. The Biker GoPro Gripper is one of the most secure devices ever developed to mount your GoPro action camera to any standard sized round bar on your Harley-Davidson. Its full 360-degree rotation allows you to set that perfect angle. The adapter securely holds your GoPro or other action cameras in place with minimal vibration. I have used this for many videos on our YouTube channel. 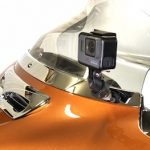 The Ciro 3D GoPro Action Camera mount for Harley-Davidson motorcycles is designed to work with any Ciro ball mount and the stud mount fits anywhere there is a 1/4″ hole. Mount your WASPcam and GoPro cameras almost anywhere on your bike. The 1/4-20 threaded studs and mounting hardware are included. This Ciro 3D GoPro action mount holds your camera secure while still allowing great adjustment. It fits WASPcam and GoPro cameras. There is a Harley batwing fairing windshield version and a Harley shark nose windshield version. 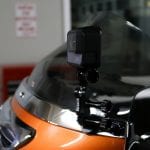 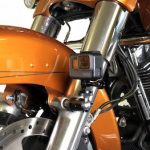 Rickrak also offers a Harley fork mount solution for 2014 and newer models. It simply replaces one of your fender bolts. The ball head GoPro mount then attaches to the stud. 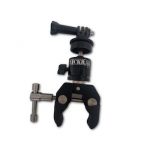 Rickrak offers yet another solution, which is the Universal Round Bar Clamp Mount. This RickRak GoPro and action camera mount is easily placed on any round bar with the exclusive Rickrak clamp. It can also be used for Sony action cameras or any standard tripod-mounted device. The clamp has a protective rubber material to assure no scratches are left behind.

Which one is best mount?

I'd recommend any of these GoPro action camera mounts for Harley-Davidson. They are all high-quality well-built products. Each mount has its place and it will all depend on what your particular needs are and what sort of shots you are trying to get. I use all of these GoPro action camera mounts at different times. It is all dependant on the particular film project I'm working on.