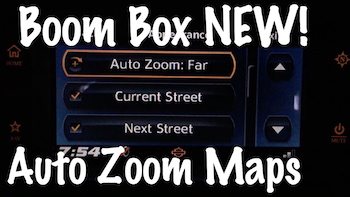 Video-In this completely free video I show you how to use the new GPS map autozoom feature that was added to the Harley-Davidson Boom!™ Box Infotainment System in the last major system software update, which was version 1.20.1. I show where the new map autozoom feature located in the Boom Box settings menu and how get it going. Basically, it allows three different settings to choose from on how close you want the GPS map to autozoom. A rider could manually zoom out to see the overall route and surroundings.  Then after a short time, the GPS will autozoom back in closer to the predetermined setting. Before this feature, a rider would have to manually zoom in after zooming out. The map will also autozoom if you leave the map view and then come back in to view the map.