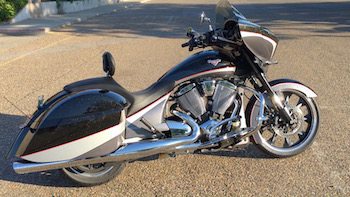 Video-In this video we give you a complete walk-around of a 2016 Victory Magnum motorcycle from an everyday bikers perspective. The Victory Magnum is similar in many ways to a Victory Cross Country model. However, the Magnum does not have engine guards and has a 21″ front wheel, the biggest wheel ever fit to a production bagger.  Then, there is the Magnum Stealth X-1, which has an upgraded sound system.  It has a 200-watt stereo system, including 10 waterproof speakers in all, including six in the front fairing — two 5.25-inch bass speakers, two 2.5-inch mid-ranges and two tweeters — plus a 6×9 and a tweeter in each saddlebag lid. The X-1 also gets a set of new black billet wheels accented by contrast cuts and a LED headlight.

The Victory Magnum is a touring class bike. It fits right line as such and competes with rivals such as the Harley-Davidson Street Glide, still the number-one-selling motorcycle in the United States, and the Indian Chieftain. The Victory Magnum is 800-pounds and a nearly nine-foot-long bagger, so don't get confused if looking at the X-1 “Stealth” model. It's not very “stealthy”.

The Magnum has ABS-enabled braking, three 300 mm discs, two up front and one in rear.  The Victory Magnum has a 1731cc Freedom 106 and a 6-speed overdrive constant mesh transmission. It has air-adjustable rear shocks and a 5.8-gallon tank should provide decent range between trips to the gas station.

Where I see the Victory Magnum failing in the touring class is the lack of an integrated GPS system such as Harley Davidson's Boom!™ Box Infotainment System or the Indian's new Ride Command System. I know they must be working on an integrated GPS and infotainment system to keep up with the competition.