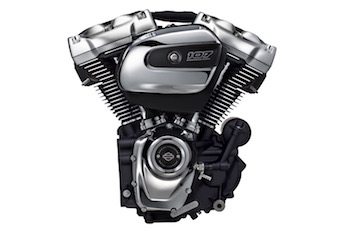 Podcast-Hang on and make sure your helmet is on as we come at you with a ton of information. That's right, Oscar & I are on the mics discussing everything about the new Harley-Davidson Milwaukee-Eight 107 ci motor! The articles on the internet are hit and miss at best. Oscar & I break it down from a real biker perspective and what it actually means for all of you Bikaholics out there! We have a real biker conversation.  Oscar has a ton of knowledge on the specs on this new motor and you'll definitely want to listen in. Then, you can make an educated decision about whether it's worth it for you to upgrade.

New 2017 Harley touring models will be equipped with the Milwaukee-Eight 107 ci (1750 cc) motor.  The CVO models will now be equipped with a 114 ci (1870 cc) motor.The eight-valve motor was a complete redesign with new cases, cylinders, heads, and flywheel. This motor is a cooler and quieter motor from Harley-Davidson, which were several of their major goals in the redesign.

Several days after recording this podcast I had the opportunity to spend some time with a crushed ice pearl colored 2017 Harley-Davidson Street Glide Special with the Milwaukee-Eight 107 ci motor. I filmed the bike in detail and went over the specs and information for you. I then did a MotoVlog for you as I took her for a test ride. See the below very popular Harley Milwaukee-Eight videos I put on my YouTube Channel!  After listening to this podcast episode and watching those videos you'll be super informed on whether this Milwaukee-Eight motor is for you or not.

Harley-Davidson eliminated the following bikes from their 2017 line up: