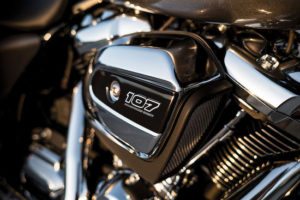 Podcast-So, you may have heard the vicious rumors going around that Harley-Davidson dealerships are voiding warranties if you install aftermarket exhaust, remove catalytic converters, or install electronic fuel injection (EFI) tuners on your new 2017 model equipped with the Milwaukee-Eight motor. The unreliable motorcycle forums are full of bad information because nobody actually researches the matter. Well, I did that for you and talked to many sources inside Harley-Davidson dealerships.

Some of these rumors got started because recently the Screamin Eagle Super Tuner was banned by the Environmental Protection Agency (EPA) and Harley-Davidson was fined $12 million dollars.

So, nothing is new with the new 2017 Milwaukee-Eight 107 or 114 ci motors in regards to warranties. For years, all Harley owners have been at risk of having a warranty voided for installing aftermarket exhaust, removing catalytic converters, or adding EFI tuners. Clearly, dealerships are not supposed to remove catalytic converters, but it's fine to install new Vance & Hines or other aftermarket head pipes without them? The confusion goes on from there.

The fact of the matter is that you're still at risk and internal Harley-Davidson policies have not changed. But, Harley-Davidson leaves much discretion to its dealerships to handle matters such as this.

So, what does this really mean for you as a Harley-Davidson owner? Make sure you have a very open line of communication with your local dealership service writer and mechanics. Ask them point blank if they are in the business of voiding your motorcycle warranty if you change pipes, intake, or add an EFI tuner.

I can tell you that most will not void your warrant and have not voided warranties for years as it's just bad business all the way around. Especially at these times when Indian and Victory are banging on Harley's doors trying to get a bigger chunk of the market.

If your dealership says they will actually void your Harley warranty for such things then never step foot in that dealership again and tell all your Harley buddies. That would be a personal choice by that particular dealership and I'd make certain they got very little business.

You'll have to listen in to this podcast episode to get the full scoop and find out what other things we learned and other tips we give!

Zeek Blake, the lead singer of the band Zane Run, is a Patron Member of Law Abiding Biker.  Zeek posted a video singing an unreleased song he calls “Cold Beer Salute” in our private Patron only Private Facebook Group. He allowed us to play it as our podcast episode opener. Zeke is a biker just like the rest of us and a great singer, so show he and his band some support and go get some of their music on the Official Zane Run Website.