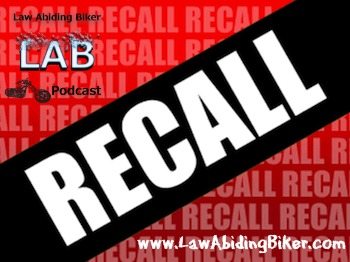 Harley-Davidson has issued a massive recall for its ABS-equipped 2014 Touring models. The recall notice affects 66,421 units. At issue is placement of the bike’s front brake line, which may become pinched between the fuel tank and frame and potentially lock-up the front wheel. I just got the recall taken care of on my 2014 Harley Davidson Street Glide Special and it took about 20 minutes at the dealer. The mechanics remove your gas tank, inspect the brake line for damage, and then put two zip ties (cable straps) to keep the line in place so it can't get pinched.

Get it on the Law Abiding Biker Podcast First!

Here are the Harley Davidson models that may are affected.

For this most recent brake line recall, H-D owners can contact Harley-Davidson customer service at 1-800-258-2464. The affected recall units are from the models listed below manufactured from July 1, 2013 through May 7, 2014:

Keep the rubbers side down and the shiny side up!