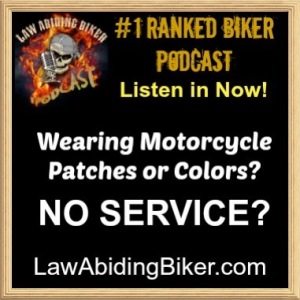 PODCAST-Is it legal for private businesses to refuse service to members of the law abiding biker motorcycle clubs for simply wearing “colors”, club affiliation patches worn on biker's vests? We have been asked this question many times here and recently received a voicemail asking this very question once again. You may hear many different things and less than truthful information and that can be frustrating for many bikers. So, as usual we broke it down for the biker community, so listen in on this debate and information! At the end of the day it doesn't really always matter what we as bikers believe should happen, but what is fact. Know that this will likely be a civil issue unless your behavior turns it into a criminal issue.

Things to think about before acting:

If you are confronted with a business refusing service to you as a biker then take a breath, leave calmly, and never go back to or support that business. You will never win by causing a scene or getting disorderly. If you believe your civil rights have been trampled then converse with an attorney to see what your legal options are if any. At best it will be a long expensive drawn out civil lawsuit, so choose wisely.

Further, share your experience with as many bikers as you can via podcasts, other social media platforms, local media etc. In this day an age it is not tough to get the word out to let bikers know of “not biker friendly” establishments and we can hit them in the pocket book where it really matters. This may also bring awareness to many. There are websites and social media platforms dedicated to this.

It will serve no purpose to cause a scene, as the business will then really have a reason to have you leave the premises. Plus, that is exactly how these business owners expect you to act, because they watched one television show at some point in their life depicting criminal bikers. Do the entire biker community a favor and walk away and handle it through proper channels. We don't want to damage the image criminal bikers have already given us, which is why these businesses don't want us in their establishment in the first place. Do your best to be polite and make them double think their decision.

You have to realize that most persons that aren't in the motorcycling community may not readily know the difference between patches and clubs, so patience and education over time and our actions is the only way to handle this.

The Federal Civil Rights Act guarantees all people the right to “full and equal enjoyment of the goods, services, facilities, privileges, advantages, and accommodations of any place of public accommodation, without discrimination or segregation on the ground of race, color, religion, or national origin.”

The right to refuse service-Can they really do this?

Like it or not, businesses or venues appear to have the right to refuse service at times, but there are civil rules and guidelines for that sort of action. Much of this argument is subjective and not objective. What I mean is that if a business simply admits that they refused service to a biker with patches solely for that reason, then that biker may have a civil case. Or clearly, if they refused service based on race, color, religion, or national origin then they would have a civil case.

However, it seems clear that if the business believes that your [biker] admittance may cause issues or safety concerns then they can refuse admittance or service. That would be the “subjective” intent of the business owner. Not just the “objective” matter of you wearing a patch and that you belong to a motorcycle club.

Case law seems to point towards some guidelines:

So, it seems that if an establishment has a “no biker club patches allowed” policy and enforce it uniformly to everyone then they seem to be within their authority and following case law.

Jax cleans up some business by killing Berosky in his bakery. Jax then sits on the steps of the courthouse as August Mark

In a recent case, a California court decided that a motorcycle club had no discrimination claim against a sports bar that had denied members admission to the bar because they refused to remove their “colors,” or patches. The court held that the refusal of service was not based on the club member's patches, but was to protect a legitimate business interest in preventing fights between rival club members. Again, I point out the subjective intent of the business for the refusal of admittance or service.

Note that a California court decided that a restaurant owner could not refuse to seat a gay couple in a semi-private booth where the restaurant policy was to only seat two people of opposite sexes in such booths. There was no legitimate business reason for the refusal of service, and so the discrimination was arbitrary and unlawful. I point out that this business had no stated purpose or concerns other than they stated.

(Does not really seem to change anything. It is still seems to be the subjective intent of the business owner. As long as the refusal is not solely based on the motorcycle club membership or clothing)

The Unruh Civil Rights Act (CC §51 et seq.) provides that in part that: “All persons within the jurisdiction of this state are free and equal, and no matter what their sex, race, color, religion, ancestry, national origin or blindness or other physical disability are entitled to the full and equal accommodations, advantages, facilities, privileges or services in all business establishments of every kind whatsoever.” Any person whose exercise or enjoyment of rights secured by the Constitution or laws of the United States has been interfered with, or attempted to be interfered with may institute and prosecute a civil action for injunctive and other appropriate equitable relief, including the award of compensatory monetary damages.

The Supreme Court ruled in the case of Cohen V. California, 403 US 15 (1971) that individuals have the constitutional right under the First Amendment to wear clothing which displays writing or designs. In addition, the right of an individual to freedom of association has long been recognized and protected by the United States Supreme Court Thus, a person’s right to wear the clothing of his choice, as well as his right to belong to any club or organization of his choice, is constitutionally protected. Persons or establishments who discriminate on the basis of clothing or club membership are subject to a lawsuit by the person who was wrongly discriminated against by such persons.

Refusal of service or admittance to patch wearing motorcycle club members, even if a violation if proven, is a matter of civil law and not normally criminal in nature. This will never be decided at the time of the incident and at best would have to be handled later through sometimes long expensive drawn out civil litigations.

You can argue with the business or venue as much as you like and it won't likely matter in the end. If your are argumentative and causing concern for other customers or the establishment then there is even more reason for them to have you removed from the premises.

By arguing publicly you are confirming ignorant concerns that law abiding bikers are bad people, disrespectful, and on the edge, which is not true. Perception is everything and arguing just feeds the perception we are all trying to get rid of thanks to outlaw motorcycle clubs, television, and other media.

The best thing you can do is spread the word about the “non biker friendly business” and hit them in the pocket book.

You really need to listen in to this podcast episode for all the information and debate!

In no way is this legal advice, but just information and opinions based on research. You need to make your own decisions based on your knowledge and laws in your state, country, or region. Always consult an attorney for any legal matters or advice.

Other items covered in this Podcast Episode:

Donations & Patrons! (These guys are so appreciated and true brothers)

Want to become a Patron of the show?

Want to donate to the show?