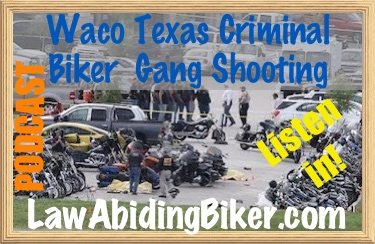 PODCAST-The opening song, “Biker Campfire” by Steve Werner (iTunes Link), is the way bikers are supposed to treat each other. We here at Law Abiding Biker consider other bikers friends we have not yet met.

It’s as simple as that wave you extend when you pass another biker on the road. Let’s all practice that kindness and acceptance and continue the Law Abiding Biker Revolution. We are the motorcycling majority and are in charge of the true motorcycle scene.

Tragically, sometimes bikers forget why they started riding motorcycles in the first place and get caught up in a dead end criminal lifestyle. Our respects go to anyone that lost their lives in the Waco, TX Biker Shootings on Sunday May 17, 2015 and to their families. We do not have all the facts and of course we consider the 9 deaths tragic.

By talking about what things are known on this Podcast, in no way do we promote or celebrate any deaths that occurred. Additionally, in no way by airing this episode do we condone any criminal behavior by any criminal motorcycle gangs. Motorcycle club names are only mentioned to properly depict the scene & events that are known.

By discussing this incident we hope bikers can learn or take away something valuable. Many news organizations have reported on the incident, but few have any insight into this subculture like we do. The traditional media has reported many absurd things that we hope to correct.

We are here to bring to light the facts and the truths, however limited they may be at this time.