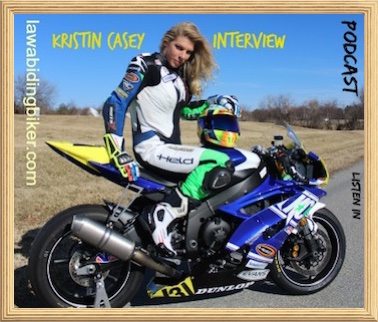 PODCAST-In this episode we talk in-depth with Kristin Casey, who is a female sports biker racer. Sports bike racing is dominated by males, but that doesn't stop Kristin and she is right in the thick of it. It seems nothing is going to stop her from taking her racing to the next level. Yep, even while competing against male racers. You won't find another podcast interview of Kristin Casey like this one, so you must listen in. We truly had a great time talking with her.

Kristin is extremely passionate about sports bike racing even after a crash in 2011 caused from mechanical failure in which she nearly had to have her right leg amputated. That put her out for over 3 years and she has been back at it in the last year.  Her father was diagnosed with stage 4 lung cancer in May 2013 with less than a year to live diagnosis and passed on in May 2014.  He was an avid Harley Davidson owner and rider and was a big part of Kristin's life. She speaks of the day she came home on a “sports bike”, which he was not fond of. He used to go to the track with Kristin and was not immediately sold on her passions for sports bike racing, yet he still supported her. After her crash, recovery, and her father being diagnosed with cancer she knew she needed to get back into racing.

It wasn't too long ago that she was involved in a second large accident while racing, but her bike took the majority of damage this time and not her body so much. Here is a line taken from her bio END_OF_DOCUMENT_TOKEN_TO_BE_REPLACED