Harley Davidson and Harman Kardon just released Boom!™ Box software update version 1.19.1.1 in November, 2015.  We have received many inquires from bikers asking if they should update to this version. It is always a good idea to wait and see if an update fixes more than it breaks and let me have some time to test things.

Note: This particular update if only for the Boom Box 6.5T Premium system and the CVO 6.5GT system. It is not for the standard 4.3 system.

I give the go ahead to update to this new Boom Box software update version, 1.19.1.1. I heavily tested the last big 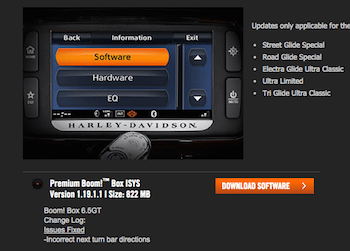 updates, version 1.19.0 & 1.19.1, back in July 2015. In this newest version, 1.19.1.1, only one new item/bug was actually fixed. That new item is labeled “incorrect next turn bar directions.” That refers to when you are in GPS mode on the Boom Box and it advises you of the next turn at the bottom of the screen.  Many bikers were experiencing problems with this function.