Harley Davidson and Harman Kardon just released Boom!™ Box software update version 1.20.1 on August 23, 2016. This comes after software update versions 1.19.2 was released in February 2016.  We have received many inquiries from bikers asking if they should update to this latest version. It is always a good idea to wait and see if an update fixes more than it breaks and let me have some time to test things. 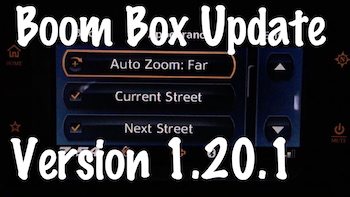 Note: This particular update if for the Boom Box 4.3 Standard, 6.5T Premium, and the CVO 6.5GT systems. I give the go ahead to update to this new Boom Box software update version, 1.20.1.

• Zoom out levels have been increased to allow for viewing
of longer routes.
• Azerbaijan Map has been added to the ROW map database.
• The heading directional display will now operate as a
traditional compass with the top representing the direction
ahead and the rotating needle shall point to the direction of
North.
• The disclaimer or “Accept” screen will now auto advance
after 15 seconds.
Added Features
• Autozoom can be configured in Navigation Setup
Appearance menu.
• There are four separate levels based on what zoom level
the map will return to after the autozoom.
i. OFF – Autozoom is disabled (default)
ii. NEAR – It will return to the tightest scale.
iii. NORMAL – It will return to the middle scale.
iv. FAR – It will return to the widest scale.
• Vehicle Information screen will display “OK” or “Check Oil”
for oil pressure on MY17 models. Oil pressure values can
be enabled with a P&A accessory for MY17 vehicles.