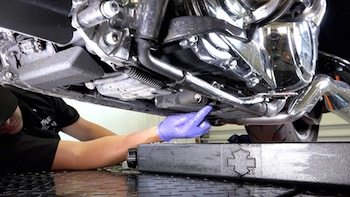 Podcast-Matt “Lurch” Couchman, Rick “Big Daddy” Kane, and Brian “Grunt” White spent the day in the Law Abiding Biker Grage. We were filming a complete service, oil change, and service on a Harley-Davidson with a Milwaukee-Eight engine!

In this episode, we give you a behind the scenes look. The Harley dealership that performed the 1K break in service on this 2017 Road Glide did not do several things properly we found. You must hear our findings, so you can be aware what to look for! We also tell you why it's not worth your money to buy these oil change and service packages from the dealership when purchasing a new Harley. Brian will tell you the truth and he tested it.

Note: Understand that the problems we found were that of one unnamed Harley dealership. We know many great Harley mechanics and dealerships. We have found similar problems like this from a few other dealerships.

The best part is you’ll have the pure satisfaction of wrenching on your own Harley right in your very own shop or garage. You’ll know things were done right. It's a great feeling!!

You’ll save a ton of money by doing these simple services yourself.

I hope to have the official video edited and released in a month or so. Stay tuned and subscribe to this channel!!