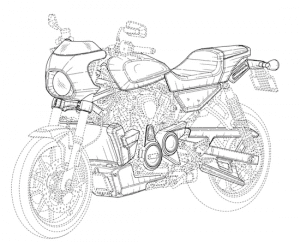 Harley has been trying to reach a broader customer base as it’s certainly important to their future existence. So, back in July 2018, Harley announced its “More Roads to Harley” strategy. If you haven’t already, you should really get up to speed and watch my video on CEO Matthew Levatich quitting and the current state of the Motor Company. 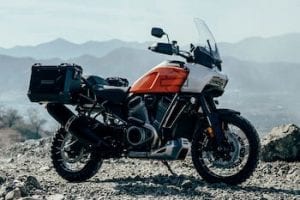 Harley is trying to be innovative with the late 2019 announcement of the Pan America Adventure Bike and the Bronx Streetfighter. These two bikes are scheduled to go into production later this year.  I’m personally most excited to see the Pan America but I fear as Harley’s first adventure bike it will be way overpriced for most riders like their first electric motorcycle, the Livewire. 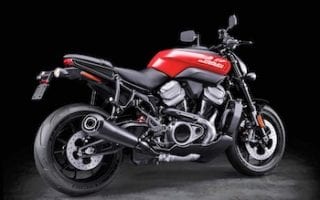 The images of these two new leaked models first appeared in a document released to Harley-Davidson investors in late September 2019 but since then Harley has filed design patents with the European Union Intellectual Property Office.

Both the Pan America and Bronx will have the Revolution Max engine and it seems that the same engine will be carried over to the two newest models we talk about in this podcast episode. 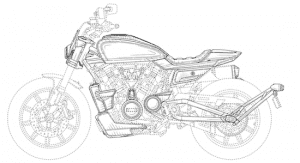 This new model seems to be loosely modeled off the XG750R Flat Tracker and it can be seen in the shape of the tank, the seat, and the two stacked exhaust pipes on the right side. 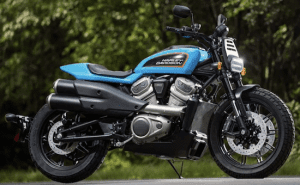 It appears the script on the air cleaner housing reads “975″, indicating it’s the same version of the engine used in the Bronx Streetfighter.  That means a claimed 115 hp and 70 pound-feet.

The flat tracker's chassis appears similar to the Bronx, with the same forks and Brembo front brakes but the tubular, triangulated swingarm is different.  One thing that really stands out on this bike for me is the triangulated tubing coming off the left side to situate the signals, brake light, and license plate. And that square style headlight looks cool.

Like the flat tracker, the cafe racer seems to be based on the 975cc Revolution Max engine from the Bronx.  It's worth noting that this cafe racer model is likely to appear later this year as a 2021 model.

The chassis is similar to the Bronx and the flat tracker and it has the same front suspension and brakes.  But, it looks like it gets its own simple straight design swingarm.  A more notable item on this bike is the rear twin shocks rather than the more traditional rising-rate monoshock. 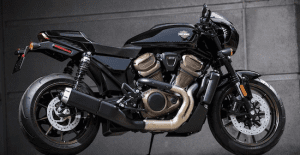 The cafe racer is a new arena for Harley-Davidson to enter. Although the bike is definitely a cafe racer, it sill has a very Harley flare to it.

Some of the other notable items on this leaked Harley is the small minimal nose cowl that looks like the one on my Dyna Low Rider. The gas tank shape has a hint of Sportster and the seat looks like that on the XR1200.