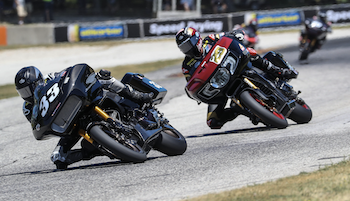 In this episode, we talk about the Mission King of Baggers Motorcycle Race Series.  The series started in 2020 with just one race at Laguna Seca.  The sponsor of the 2020 race was Drag Specialties with 14 teams competing.  Only twelve bikes started the race (a couple of teams couldn't get over the border from Canada because of COVID).  Tyler O’Hara won on the S&S Indian Challenger.

The debut of King of the Baggers was a success and led to a 2021 season consisting of three races.  Mission Foods took over as the primary sponsor.

Kyle Wyman was crowned the 2021 Champion.  He had a plate in his elbow from a crash six weeks prior!

For 2022, the series consists of six races with Mission Foods staying on as the primary sponsor.  The series opened up at the Daytona Speedway during Daytona Bike Week.

Harley-Davidson had some engine issues on the Wyman's bikes

From Daytona, the series heads to Road Atlanta in Georgia on April 22 through 24.  This is where last year’s opening round was held. The next stop is June 3 through 5, when King of the Baggers arrives at Road America in Elkhart Lake, Wisconsin.  Iconic WeatherTech Raceway Laguna Seca (site of last year’s finale) will play host on July 8 through 10.

Finally, the last two rounds of the 2022 series will be at tracks that have just been added to the King of the Baggers schedule. Brainerd International Raceway in Brainerd, Minnesota, the home state of Indian Motorcycle, will host the event on July 29 through 31, and New Jersey Motorsports Park in Millville, New Jersey, is where the final race takes place on September 9 through 11.

The King of the Baggers series and Harley-Davidson owners modifying their baggers inspired the all-new Street Glide and Road Glide ST.  Check out Law Abiding Biker Podcast Episode 295 where we talk with Paul James, Eric Buckhouse, and Bjorn Shuster from Harley-Davidson