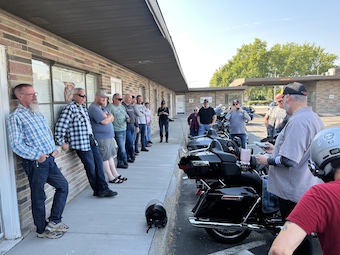 Law Abiding Biker (LAB) Store Manager Big Daddy Kane (BDK) put on a Pacific Northwest meet-up and ride.  Unfortunately, we were unable to do an official LAB meet-up and ride earlier in the summer, like we do every year.  Rick took it upon himself to plan a meet-up and ride, which was much appreciated.  We met at the LAB store in Richland, WA.  Rick opened up the store for yours and hooked Patrons up with some merch/parts.  We had a beautiful ride into Oregon and back to BDK's place for a BBQ.

Patron members that attended were:

BDK settled the long debate dispute of what Charles Wilburn's road name should be.  It jas been a topic in the LAB Patro Member Only FaceBook Group.  BDK presented Charles with a “Dakota” name tab.  He also presented Bob Dawson with a “Picasso” name tag.  Bob operated Dawson's Painting out of Yakima.  He hooked the LAB studio and BDK's garage up with awesome paint jobs.