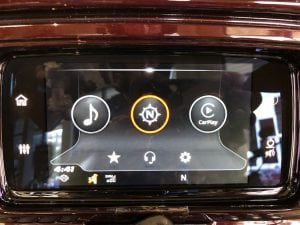 In late August 2018 Harley-Davidson released a new version of their Infotainment System they're calling the Harley Boom Box GTS. This system was preceded by the old Boom Box 4.3 and 6.5 systems, which have been around since their release in 2014 on project Rushmore models. (see my very popular review video at the bottom of this article)

I tested the new Harley Boom Box GTS Infotainment System thoroughly so that I could relate to you what it can and can’t do. The new Boom Box GTS has Apple Car Play, but not Android Auto. The only way to get Apple Car Play to appear on the system is to purchase and install a Harley Wireless Headset Interface Module (WHIM), which will allow you to pair a Harley branded Sena 20s EVO wireless Bluetooth headset with the Boom Box GTS. You’ll need to purchase and pair the Harley branded 20s headset and then make sure your iPhone is plugged into the Boom Box and then Apple CarPlay will appear and function. 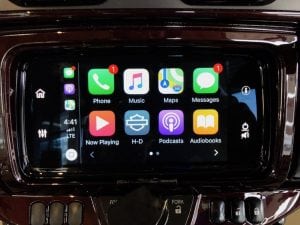 Harley says that the touchscreen is just as responsive even while using it with motorcycle riding gloves. It also has a more detailed screen and better contrast for viewing on those bright days.

Although the new 2019 Harley Boom Box GTS has many improvements over its predecessor, it still has many nuances and has a definite learning curve. There are some things that are a bit hidden and not obvious to a standard user. There were also bugs when we were trying to pair a Harley Sena 20s headset to the Boom Box GTS and it kept failing, but after four tries it finally worked. Bugs and issues are the legacies of the older Boom Box 4.3 and 6.5 versions, so I really hope this is not a clue on what’s to come.

I love the new look and feel of the Boom Box GTS. It is definitely an upgrade to the older clunky 6.5 Boom Box that is on 14-18 Harley's. I love that it is all touchscreen and all the physical buttons are now gone. I love that it operates like a smartphone or tablet with touch to scroll and pinch to zoom. It is very responsive and doesn't lag much. The menus are much easier to use and understand, but it still has a learning curve and there are hidden and ambiguous things that won't be obvious to many regular users.

Yes, it has Apple Car Play. However, it won't appear or function unless you purchase and install a Harley Wireless Headset Interface Module (WHIM). You must also purchase a Harley branded Sena 20s EVO Wireless Bluetooth Headset and pair it with the Harley Boom Box GTS before Apple Car Play will appear. You can, of course, use a wired headset solution and Apple Car Play will work. You'll need to install a 7-pin DIN communications port if you don't have one. There is no Android Auto available.