We spent the day in the Law Abiding Biker™ Shop installing and filming a Rockford Fosgate speaker and amplifier system for Harley install.  We installed the system on a 2015 Harley-Davidson Road Glide. In this Podcast episode, we go over the entire install and give you our opinion on how the sound quality stacks up to other systems we currently have installed on our Harley's.

I want to thank Patron Member Greg Jordan for taking the 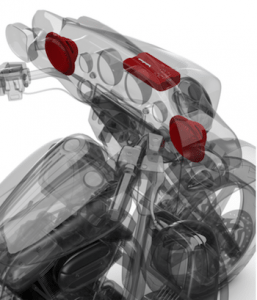 time to get ahold of us. He lives about 2 hours west of our location in Washington State and made arrangements to come over for the day and let us film and install the Rockford Fosgate speaker and amplifier system on his Harley.

That is the awesome Patron Member Community that is growing here at Law Abidin Biker™ Media, Inc. He wanted to share this information with the rest of the community! Greg got to see behind the scenes what it's like to film a detailed install tutorial video.

Rockford Fosgate now offers a Harley front audio upgrade kit featuring a plug and play amplifier wire kit, a Power series small chassis, 4-Channel amplifier and our new 6.5″ direct fit speakers. The kit comes with everything you'll need for the install. We found this is a universal kit that will fit 2014 & newer Harley Street Glides, Road Glides, and Ultras!

The exact Rockford Fosgate Harley System we installed is as follows: 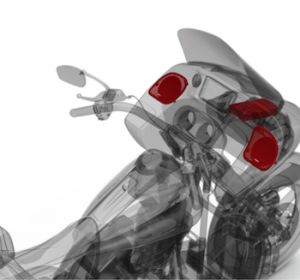 You will need to have your Harley Boom Box Infotainment System flashed after or before install and definitely before firing the system up for the first time.

Unfortunately, some Harley dealerships are now refusing to flash the Boom Box with their Digital Technician software unless you buy a Harley brand amp/speaker system and pay the Harley tax. They will not flash the Boom Box if you have another brand system such as Rockford Fosgate.

To combat this, there are motorcycle shops that have similar but limited software and they can flash the system to the proper configuration and Rockford Fosgate provides a list of those shops on their website.

During installation of the Rockford Fosgate speaker and amplifier system for Harley, we noted that all the components are of high quality and nothing is lacking. The wires are very thick and everything is well put together. It is a universal kit to fit multiple Harley models, so there are components you won't use.

After listening to the Rockford Fosgate system we were very impressed. It has great audio quality and clarity and can be turned up loud w/o distortion. In comparison to our J&M amp/speaker system and our Harley Boom Audio Stage 2 amp/speaker system, the Rockford Fosgate definitely has less bass and more of the mids and highs. The J&M and Harley Boom Stage 2 system have a bit more bass and mids. That's not a good or bad thing, but we wanted to note it. Much bass is lost anyways at freeway speeds when riding. The systems are very similar when running a decibel meter test and nothing was remarkable.

The Rockford Fosgate speaker and amplifier system for Harley is less expensive than both the J&M and the Harley system at $850 at the time of this review.

Note: As a reminder, we already have 4 tutorial videos available for other popular speaker and amp systems for your 2014 and newer Harley-Davidson.

Note: See our video explanation of the 4 other audio kits for Harley!

Note: Listen to this Podcast Episode #105, as we go over the pros and cons of each of the 4 other Harley audio systems and the install info! 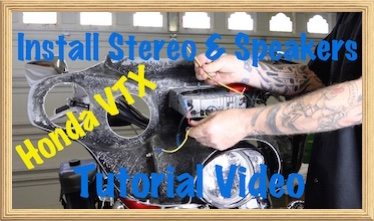 Video-If you own and ride a Honda VTX motorcycle then you have probably wondered what it would take to have a stereo and speakers installed. There is nothing better for long cross-country riding than having a fairing and stereo system. Stereos & fairings are great for daily riding too! Before you install a stereo and speakers you will need to install an aftermarket batwing style fairing first. Of course we have a free video on that.

Once you have your aftermarket fairing installed you are ready to check this video out. In this free video we show you everything you need to know so you can install a stereo head unit, speakers, and complete all associated wiring! You will be up and running in no time and cruising down the road while rocking it to your favorite tunes!

Save your money and do both of these projects by yourself right on the kickstand in your very own shop or garage. Only basic tools are needed and there is no need to pay a dealership to do this.

Of course once you have your stereo installed you will need to mount your smartphone to your handlebars to have access to it and plug it in to play your tunes! The Biker Gripper Cell Phone Motorcycle Mount is your best solution!

If you appreciate free information & videos like this make sure to join the thousands of law abiding bikers that have already joined the free LawAbiding Biker Podcast & Media Email Club!! You will be notified of new useful motorcycle related content as we put them out. Join the Community now!