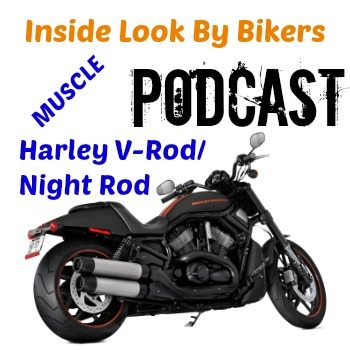 Special. We have Bid Daddy Kane on hand, who has personally owned one of these bad ass bikes. He has intimate knowledge of it and even tricked it out. He has since sold that bike, but misses it in many ways.

Although the V-Rod seemingly has less interest than many other Harley models, it certainly has earned a place among many bikers. There are some pros and cons to the V-Rod and much of it has to do with personal taste and style. We reveal why you might be interested in this bike and why you may not be.

We dive into the specs of the V-Rod and its history dating back to 2001. It has some amazing history and was produced to compete with Japanese & American muscle bikes. The V-Rod uses a Revolution engine, which was developed jointly with Porsche. This was the first time Harley used overhead cams and liquid cooling.

What looks like the gas tank on a Harley V-Rod is actually the air cleaner cover. The actual gas tank is relocated to underneath the seat. Harley Davidson builds the V-Rod as a platform for drag-racing competition machines and is loosely based on the VR-1000 Superbike. The V-Rod uses an internally counterbalanced 60 degree V-twin engine.

You really must listen in as we go in-depth in this episode. If you've every wanted to know more about the Harley V-Rod then take a listen!

Voicemail we played: (leave a voicemail)