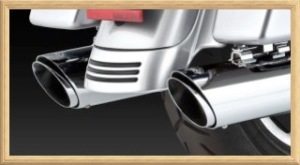 Another Free Video For Bikers By Bikers

VIDEO & REVIEW-I have owned many Vance & Hines headers and mufflers over the years and have always been pleased. There are many differences between pipes/mufflers in regards to performance, sound, and looks. This is one of the biggest decisions many bikers make after they get their new Harley and it can be a bit stressful as we all know this is not a cheap investment.

Changing out your exhaust and then your air intake are two things that will greatly increase performance and sound.

Install new exhaust on your Harley yourself!

Install a Stage-One Air Intake on your Harley!

Please know that whenever changing exhaust system components and air intakes you will need to remap your electronic fuel injection (EFI), so that your motorcycle runs optimally. Don't worry, we have you covered with everything you need to know about how to remap your fuel injection.

Everything you need to know about mapping your EFI!

In this video we look at the Vance & Hines Dresser Twin Slash Round mufflers in comparison to the stock mufflers that came on my 2014 Harley Davidson Street Glide Special.

I have the video set up, so that it quickly goes back and forth between the two mufflers, so you can truly get a sense of the sound quality and differences. Use HEADPHONES/EARBUDS to view this video, so you can get a true sense of the different sounds.

PURCHASE ANY VANCE  & HINES PRODUCTS RIGHT FROM OUR STORE AND SUPPORT US!

Both the Big Radius and the Big Shot Duals were great pipes if you want sound, but are not the best choice for performance if you care. And wow, do they have sound. They definitely fall in the category of “loud pipes save lives”. It is not a joke when I tell you that driver’s of cages here you coming for sure. The Big Radius is just simply a bad ass looking pipe. I prefer the Big Shot Duals for a touring model Harley Davidson.

The Big Radius pump the sound out the right side of the motorcycle towards the ground. For that reason, other riders tend to not like riding on your right side for long distances. The Big Shot Duals pump all the sound straight out the back. And for that reason, other riders tend not to appreciate riding behind you for along distance. Just my personal experience when I ran those two systems and it all depends on what type of riding you are doing. All pipes have their place.

For my 2014 Harley Davidson Street Glide Special (FLHXS), I chose to change things up, but still wanted to stick with Vance & Hines. I wanted a quality sound, but without being obnoxious & without loosing power. I desired to have my Harley sound like a Harley with a lower pitched throaty sort of sound. You know, like Harley’s used to sound before they were made to put all kinds of things inside them like catalytic converters (cats) and large baffles blocking the stock muffler/pipe inners. These poor Harley’s are robbed of their true performance capabilities, because of things like this.

Anyways, I looked around the internet and watched some YouTube videos on different Vance & Hines mufflers, but none of the media were of great quality. I had never heard the Twin Slash Rounds, as nobody I ride with has this exact model of muffler.

I took the leap and just ordered them. I liked how they looked and was alright with the price. I went with my gut and the description that Vance & Hines wrote about the mufflers. I ordered these particular Twin Slash Round Slip-On mufflers through my local Harley Davidson dealership for $399 + tax. They go for $424.95 on the Vance & Hines website, so I got a bit of a break.

It took about 30 minutes to take the stock Harley Davidson slip-on mufflers off and replace them with the Vance & Hines Dresser Twin Slash Round Slip-On mufflers.

Immediately after installing the Twin Slash Rounds I remapped my EFI for optimum performance. You will want to do the same and we have you covered on that subject and how you should proceed.

Everything you need to know about mapping your EFI!

After I found a lack of information on this product, I wanted to write this article, conduct a review, and produce a thorough video for other bikers considering purchasing the Twin Slash Round Slip-On mufflers.

I am extremely happy with the Twin Slash Rounds. The sound was exactly what I was looking for, that true Harley Davidson sound. They are lower pitched and throaty, but far from obnoxious. When you give it the gas and run through some gears, they really have an awesome sound that you will not be disappointed with! A sound that won’t annoy the riders behind you, but that will let people know it is a Harley Davidson motorcycle.

As far as the headers go, I was able to get an used set on the internet without catalytic converters (cats). If you want to open up your headers then V&H also sells new header systems that don't have cats in them. This will definitely increase horsepower and reduces heat on the rider. Check with your state and local laws reference exhaust. Don't worry, we have you covered if you want to save money and install your own headers and mufflers.

Install new exhaust on your Harley yourself!

Vance & Hines does sell a quieter baffle for the Twin Slash Round mufflers, but I don’t find that will be necessary at all. I would not want them any quieter. I can listen to my Boom Box Infotainment System no problem at freeway speeds, but still hear that awesome Harley Davidson sound behind me! And my friends aren’t afraid to ride behind me when I’m in the throttle heavy.

I sincerely hope that this review blog and video will help bikers/motorcyclists make an educated decision on whether to purchase the Vance & Hines Dresser Twin Slash Rounds Slip-On mufflers.

Here are some easy ways you can make sure to be in the know when we release new videos and information like this.