Harley Davidson and Harman Kardon just released Boom!™ Box software update version 1.20.3 in January of 2017. There are just some small behind the scenes fixes to version 1.20.2 that was released on October 17, 2016. Many of you know, HD pulled 1.20.2 shortly after release as some bikers were having problems. It's all fixed in 1.20.3 now.

Harley Davidson and Harman Kardon just released Boom!™ Box software update version 1.20.2 on October 17, 2016. This comes after software update versions 1.20.1 was released in August 2016.  We have received many inquiries from bikers asking if they should update to this latest version. It is always a good idea to wait and see if an update fixes more than it breaks and let me have some time to test things.

Note: This particular update if for the Boom Box 4.3 Standard, 6.5T Premium, and the CVO 6.5GT systems. I give the go ahead to update to this new Boom Box 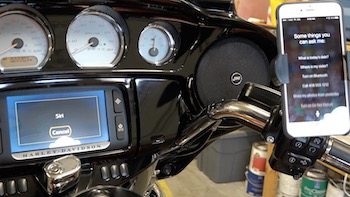 Of particular interest in this update is integration with iPhone's Siri functions.  However,  a headset with boom mic will be needed. Once you have connected your iPhone to the Boom Box via Bluetooth, you can push and hold the voice command button on the left control cluster for five seconds. Then Siri will be activated and through your headset mic you can give Siri all the commands we are all used to and hear her responses. You can get directions, find nearby restaurants, play songs, albums, podcasts, and skip to new songs by simply telling Siri!

You'll want your iPhone perched up where you can see it in a Biker Gripper , the sexiest, sleekest, and strongest cell phone motorcycle mount on the market.

Don't worry, as you still may want use the GPS built into the Boom Box and you can. Instead of holding the voice command button for five seconds you simply push it quickly and let up and the Boom Box voice command menu will appear instead of Siri activation. Then, through your headset mic you can give the Boom Box all the specific commands we have all become accustomed to, such as navigation.

I installed and tested this software update for you. As usual, don't expect any miracles and that suddenly all things will be fixed for ever user. They still have a long way to go to get rid of all the problems that persist with the Harley Boom!™ Box Infotainment System. We are all skeptical that they'll ever get the Boom Box working perfectly at this point.

Added Features
· Siri functionality has been added. Hold Voice Recognition button for 5 seconds to activate.
· Added media browsing over Bluetooth for iPhone.
· New feature to allow searching for another address while still having an active route.

As I have stated, Harley Davidson put the cart before the horse a bit on the Boom Box  for the Rushmore Project and is playing catch up now. The system is awesome but has several issues. I truly believe these issues will be corrected in time with the ongoing software updates.