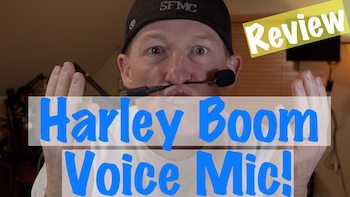 We have received a ton of emails and comments on our YouTube Channel, so we thought we would address this for all you Bikaholics out there!

You may have come across items on eBay and Amazon labeled “Wireless Microphone for 2014 & up Harley Davidson” at a cost of around $45. Basically, it is nothing more than a flexible stick microphone that plugs into your Harley Davidson 7 pin headset port on top of your gas tank on full touring Harley models. It has a foam wind screen over the mic to cut down on wind noise.

The claim is, you can sit up straight, ride on down the road, and give voice commands to the Harley Boom Box System without the use of a “wired headset.” I submit that this is a wired microphone (minus ear speakers) as it plugs directly into the 7 pin connector. After giving voice commands, the voice within the Boom Box will respond through your stereo speakers.

The Boom Box Infotainment System is capable of voice commands such as navigation, making phone calls, changing radio stations, finding songs/artist by name on your paired smartphone or MP3 device, skipping to the next song and so on.

As usual, we tested this microphone in a real world environment and not in a controlled setting. We want to know how things work for the average everyday biker out there on the road.

Our opinion is that this may have an use for bikers, but with obvious limitations. A biker might use this at very low speeds around town or at stops during the trip. One might give voice commands to set GPS destinations or make a quick phone call before heading out at higher freeway speeds.

Our personal opinion is there are more reliable items on the market for giving voice commands to your Boom Box system that will work in all conditions. And those particular headsets also have great headset speakers for hearing the built in voice respond back to your commands.