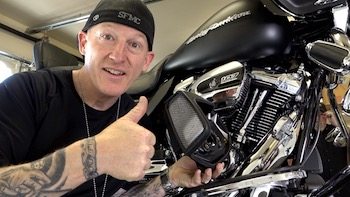 Video-In this completely free tutorial video we show you how to install a Harley brand stage-one air intake on a Harley-Davidson touring model equipped with the Milwaukee-Eight motor. Yes, you'll need to re-map your electronic fuel injection (EFI) after you install a stage-one air intake. We make it simple using the Vance & Hines Fuelpak 3 EFI tuner. You can get a V&H Fuelpak 3 right in our store and we have very popular free tutorial video on how to easily get up and running with the FP3.

We also suggest when installing a stage-one air intake on your Harley that you also install Vance & Hines exhaust headers and mufflers to really increase your overall performance and sound.

SUPPORT US AND CHECK OUT OUR AWESOME MOTORCYCLE TUTORIAL VIDEOS!

VIDEO & BLOG-This is a Law Abiding Biker Podcast & Media (LAB) Production. In this video we teach you step by step w/o skipping any steps how to install the K&N Aircharger air intake to your Harley Davidson motorcycle. K&N Part #63-1122P.

You must remap your fuel injection system with a Harley Davidson download at your dealership when changing air intakes or exhaust systems. Or you can buy a product such as the Dyno Jet Power Commander V that hooks to your Electronic Control Module and remaps your fuel injection.

If you choose the Power Commander V, then check out our install tutorial video!

You can get the Law Abiding Biker (LAB) Podcast on iTunes, Zune, Blackberry, TuneIn Radio and Stitcher Radio. You can also listen right from the website.

After watching this video you won't have any problems installing the K&N Aircharger air intake to your Harley Davidson motorcycle. K&N Part #63-1122P.

Law Abiding Biker Motorcycle Podcast and Media. Keep the rubber side down and the shiny side up!

Guarantee you can do this!

Purchase exhaust through our affiliates if this Free video was useful!

Harley stage-one air intake on your Harley Davidson motorcycle. This will **save you money** by not having to take your Harley to a mechanic. You can do this yourself right on the kickstand in your garage or on your patio! This is a video by bikers for bikers.

One of the first things you can to to your Harley Davidson after buying it is to install a stage-one air intake. It is one of the cheaper yet effective things you can do to improve performance and horsepower. The stock air intakes tend to not allow enough air flow, which manufacturers of production motorcycles must do to stay within federal emissions regulations to sell these bikes.

After you make alterations to a motorcycle air intake system by opening is up and letting it breath better, you will need to re-map your electronic fuel injection (EFI) for the motor to run properly. You can really tune your EFI with aftermarket tuners. This is a great way to gain power and performance and you will definitely notice. We have tutorial videos and everything you need to know about EFI tuners and tuning your motorcycle.

WHAT YOU NEED TO KNOW ABOUT EFI TUNERS!

Exhaust would be the next logical item to improve upon, but can be rather expensive. Stock Harley Davidson and other motorcycle pipes have catalytic converters in them, again because of federal manufacturing emission laws. These “cats” as we call them really don't let things flow and rob you of power and performance. Many aftermarket performance head pipes come free and clear of cats and that will make a huge difference in performance and sound. Additionally, the cats cause a lot of extra heat where gases are caught up and restricted, thus putting the heat onto the rider. Your pipes in the area of the cats can get red hot, but they are usually covered by heat shields, so you don't really see this.

The stock mufflers also have very restrictive baffles in them that also hinder flow. Many after market pipes have smaller baffles, but remember that smaller baffles means a louder motorcycle.

Install Aftermarket Exhaust on Your Harley

PODCAST-#LawAbidingBiker-We discuss a seven day motorcycle trip we took in late August 2013.  We had full patched Sworn Few Law Enforcement Motorcycle Club (LEMC) members, prospects, & ride alongside present on this 4 state & 2,200 mile ride. We reminisce about the trip & the unusual things that occurred.

If you would like the exact map & route of the ride we took, please email Rob “LD” at Rob@SwornFewMC.com & he will send it to you via Harley Davidson's Ride Planner.

We talk about the fact that helmets are not required in Montana, Wyoming, & Idaho. We have some funny stories about what is safe & what's not. We also cover the importance of having proper riding gear & rain gear on these sorts of trips.

We discovered an awesome band that was playing at a club in Idaho & want to give them recognition. They are named the “Walking Phoenixes” & are from Los Angeles, CA.  Come to find out, they were he headed to play at a large law abiding motorcycle biker event!  The links to find out more about this band are as follows:

2.) How to remove your stock Harley air intake & replace it with a stage one air intake system

3.) How to install a Dynojet Power Commander V

The above videos will not be publicly released for some time. If you want these step by step tutorial videos that skip no steps, please donate $20 or more & we will send you all 3 videos. You can donate via PayPal at www.LawAbidingBiker.com. At the time of donation, please leave a comment, “send me the 3 videos”.  Of course, once the videos are publicly released sometime in the future, this will no longer apply, as they will then be free.