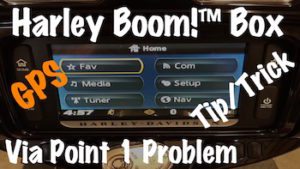 Video-I was recently on a 6-day motorcycle trip across multiple states on my Harley Davidson Street Glide Special. We ultimately ended up in Colorado.

Prior to leaving, we had our ride completely mapped out using Harley Davidson Ride Planner. I downloaded our trip and uploaded it to my Boom Box Infotainments System, which has integrated GPS.

We all know by now that the Harley Boom!™ Box Infotainment System has had many bugs and issues since its inception. The integrated GPS system has seen its fair share of quirks that can be very frustrating.  Harley-Davidson & Harman Kardon, makers of the Boom Box, have been trying to work the issues out through the routine Boom Box Software Updates.

The error and frustration I speak of in this tutorial video is specific to the GPS “via point 1” issue. Basically, Ride Planner & the Boom Box don't always translate things the same. A rider should be able to just head out on the road each day and hit the “start” button in the GPS for that day's ride. What happens is that a mysterious “via point 1” gets put into the mix.

So, you head out on your Harley after hitting “start” button and the GPS keeps trying to re-route  you back to “via point 1”.  In my case “via point 1” was a hotel we stayed at the prior night. Frustrating for sure.

The way you get around this is to go into the listed addresses and locations for that day's ride. Don't just hit the “start” button. Instead, scroll down through the ride plan and select the next physical address you are headed to that day. Then the Boom Box leaves behind “via point 1” and you can head on down the road.

Harley Davidson and Harman Kardon silently released Boom!™ Box software update version 1.19.1 in July, 2015. Bikaholics everywhere are wondering if they should update. Well, that is what I have been here for all along. I took the leap of faith for you and tested the update to make sure it does not break more than it fixes like in the past.

I give the green light to update to this new version, 1.19.1. Mostly, because I heavily tested the last update, version 1.19.0, and in this newest version, 1.19.1, only one new item was added to the update list. Other than that it was all the same exact updates/fixes we saw in version 1.19.0 back in May, 2015. Not sure why they came out with a new version for one item? That one new item is labeled as “Road Tech zumo prompts inaudible”.

Harley Davidson and Harman Kardon silently released Boom!™ Box software update version 1.19.0 on May 22, 2015. Bikaholics everywhere are wondering if they should update. Well, that is what I have been here for all along. I will take the leap of faith for you and test the update to make sure it does not brake more than it fixes like in the past. Keep checking back here, subscribe to our YouTube channel, and listen to the weekly Law Abiding Biker Podcast to learn the results. I hope to have this done very soon.

This update claims to fix the following:

I will say that since the last update, where numerous navigation updates were made,  the Boom Box & Harley Davidson Ride Planner have been working pretty well together. The Boom Box Navigation has been more stable too! If you aren't using Harley Davidson's Ride Planner to integrate with your Boom!™ Box system then you are END_OF_DOCUMENT_TOKEN_TO_BE_REPLACED

Harley Davidson is equipping all 2014 and later touring models with the Boom!™ Box Infotainment System. Frustrating to many bikers/motorcyclists is the fact that there is absolutely no bluetooth headset capable of pairing with the system. There is a wired only solution at this time, which we will discuss below if you are interested.

As I have said here many times, Harley Davidson put the cart before the horse on releasing this Boom Box system. Although the system does some amazing things, it does have a steep learning curve that we can help flatten with our #1 ranked Harley Davidson Boom!™ Box Tutorial videos! The system is getting better and better with continuing software updates. Make sure your system software is up to date at all times. We show you how to do that in our Harley Boom Box Software & Map Update Video.

Harmon Kardon, the maker of the Boom!™ Box system, are of little help at this point & remaining silent. Bikers are getting the run around from Harley Davidson too and neither company wants to take responsibility for a variety of issues going on with the Boom!™ Box system. We get emails from community members stating that Harmon Kardon & Harley-Davidson are both sending bikers with questions away or not even answering them at all. This furthers the frustrations many loyal Harley owners are feeling.

Want to run a wired headset with your Harley Boom!™ Box?