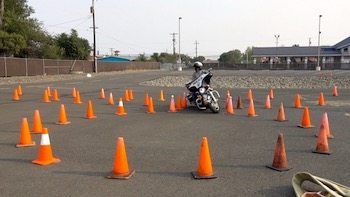 We strongly encourage you to listen to our two-partseries on Basic Police Motorcycle Officer School first:

The track is 2.7-miles and is one of the finest in the country. The nationally recognized course remains in constant use both for driving cars and for motorcycle training. I got to ride my Police Harley-Davidson Electra Glide on the course while Oscar rode his Police Honda ST 1300. We had a blast and share our experiences. This is a complete behind the scenes tour of what it was like! We also have some funny stories to share.

We also share some funny stories, both leading up to the training and things that happened during the training.

Vlog-Those of you that follow me and Law Abiding Biker™ Media know that my full time paying job is as a Law Enforcement Officer (LEO), specifically a Motorcycle “Motor” Officer. That means that I run Law Abiding Biker on the side on my days off. Many of you inquire and are interested in me as a Motor Officer, so I figured now was a good time to share a bit as we have a very spectacular event coming to our local area and I'm helping organize it. I share much more in our Private Patron Member Only Facebook Group, so get signed up.

My local police agency is hosting the 2017 North American Motor Officers Association (NAMOA) conference. We've been planning it for about a year now and have really been buckling down the past months to make it all happen. It looks like near 125 Motors Officers from all different agencies will be attending and competing. There will be all different skill levels and makes of motorcycles. The events are open to the public.

NAMOA is a non-profit organization and the entire yearly conference runs on donations. Yes, Law Abiding Biker also donated to NAMOA to help support this awesome event. You can support NAMOA to by going to their website and donating. The primary goals and objectives of the NAMOA are to provide effective, proficient and uniform police motor operations training; and to encourage safety, participation, cooperation and exchange information between police motor officers and between law enforcement agencies with police motor programs.

The training conference also provides an opportunity for thousands of citizens to watch and interact with police officers from all over the Northwest and beyond. Motor officers often learn new skills they can take home with them which will help them be safer at work.

Many of you ask what Police Motorcycle I am currently riding. The answer is I am assigned a 2013 Harley-Davidson Electra Glide and I have it all ready to rock and roll. I recently put new rear brakes, clutch, and rear tire on it. Everything is feeling good and dialed in.

I handed Law Abiding Biker responsibilities over to Lurch and Big Daddy for the week, as I will be working some very long days during the conference. I'm not only competing but as I said, we have all the hosting agency responsibilities on top if it.

I'm not sure if I will be able to produce and release a follow-up video on NAMOA 2017 due to me being so involved in it. I do have some friends that are going to try and get footage for me. I will try to get some footage should time allow. At a minimum, we'll talk about it in an upcoming podcast episode.