If you want to stay up to date on all  Harley Davidson Boom!™ Box updates and issues then subscribe to the free Law Abiding Biker Email list below:

Harley Davidson and Harman Kardon just released Boom!™ Box software update version 1.21.2.1 on August 7, 2017. This comes after software update versions 1.21.0.4 that was released in March 2017.  We have received many inquiries from bikers asking if they should update to this latest version. It is always a good idea to wait and see if an update fixes more than it breaks and let me have some time to test things.

Note: This particular update if for the Boom Box 4.3 Standard, 6.5T Premium, and the CVO 6.5GT systems. I give the go ahead to update to this new Boom Box software 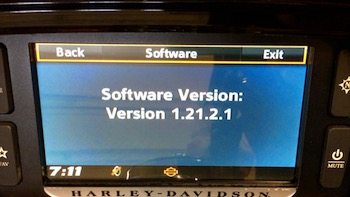 Answer: No, you do not have to update incrementally. If you get behind, just grab the latest software update here and install it. It will update everything you need including past updates. There is no access to the older updates from the Harley website anyway.

Question: If I update my Boom Box to the newest software version and don't like it or it brakes things, am I stuck with it?

Answer: No, as long as you have been saving each Boom Box update file somewhere you're fine. You can go to a past software update file and install that over the new update version (downgrade). Keep all software versions and updates as Harley does not post or give access to older versions.

Of course, the purchase of any of my Boom!™ Box series of videos includes free updates as things change with the software updates or new things are learned. All customers that have already made a purchase are getting the latest information, tips, and tricks for free. That is my commitment to the biker community! That's how I roll……………..