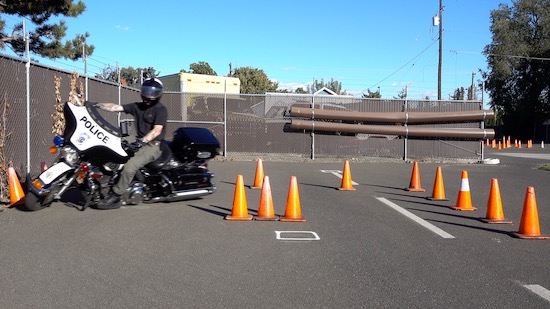 This is a brand new cone pattern drill I designed for an upcoming Police Motorcycle Officer Training Course. I have designed it from scratch and I am calling it “The Chaser”.

I spent quite a bit of time testing and measuring things out. I tested it all out on my Police Harley-Davidson Electra Glide. At the end of the video, I walk you through the course and give you the exact measurements and how to set it up.

This is an advanced police motorcycle cone pattern and you should be a very experienced and skilled rider before trying this at the prescribed measurements. If you're a beginner or intermediate rider, you can widen and lengthen all the cone settings.

GET A PDF DRAWING/MEASUREMENTS OF THIS CONE PATTERN HERE

The goal of this pattern is to get riders comfortable with emergency threshold braking, obstacle avoidance and quick and aggressive U-turns. This is a maneuver Police Motorcycle Officers perform daily while turning around to catch violators or to respond to collisions, just to name a few.

Once riders discover the proper turn points and get into a rhythm, it will feel awesome and will look great. If a rider does not hit the proper points and is forcing the bike it will be very difficult. It's all about full bar locks, head and eye placement, quick transitions, and quickly coming in and out of the clutch gray area in this drill. 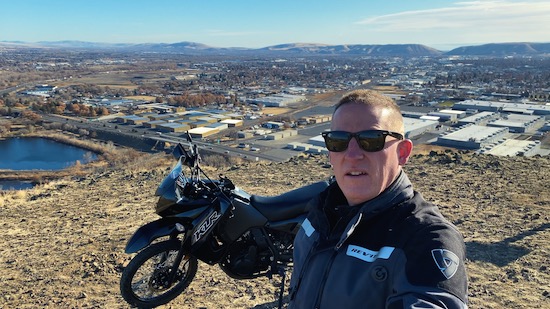 I have ridden street bikes and Harley-Davidson motorcycles for many years now. I still love street riding and cross country riding. However, I love all motorcycles and am also getting into adventure motorcycle riding in addition to street.

I bought a Kawasaki KLR 650 for my first adventure motorcycle. I also took the KLR 650 out for the first time off-road for an afternoon and had a blast. 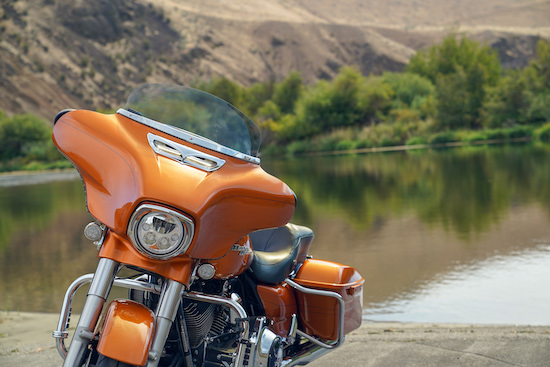 If you're looking for one of the best and most durable aftermarket windshields for your Harley-Davidson motorcycle then you'll want to check these out!  It's the F4 Customs Windshield for Harley.  I came across this awesome family-owned company earlier this year and it didn't take me long to fall in love with the windshield after I put it on my 2014 Harley Street Glide Special. (see video below in this article)

F4 Customs was founded in 2007 by owner Don Frank and the company is based out of Ohio. They continue to this day making windshields, not only for Harley-Davidsons but for Indian motorcycles, Honda Goldwings, Yamaha and more! These are some of the toughest most durable aftermarket windshields I've ever seen for Harley.

Owner Don Frank and his crew are actual motorcycle enthusiasts and ride often and for long distances! Thus, they understand the true needs of bikers and have listened to feedback over the years, making it the great windshield that it is today.

The Hammer & Scratch Test (see my video below)

One of F4 customs torture tests is to rub steel wool across the windshield. I actually tried this and you can see it in my video. I was amazed that the F4 Customs Windshield for Harley did not scratch!  This is amazing, considering most other aftermarket windshields for Harley scratch and swirl easily and even during regular cleaning and maintenance.

Next, I took a hammer to the F4 Customs windshield. I literally hammered it 30 plus times and it would not break! Hammer marks were left where I was striking it, but they wiped right off with my glove and there were no scratches left behind! Okay, I admit, I was even skeptical the windshield could handle this, but it did! (see my video below) 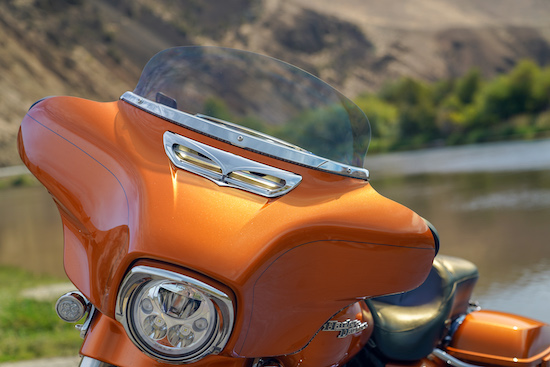 The reason the F4 Customs Windshields for Harley don't scratch with the steel wool is that they have a proprietary process in which they bake in a hard coat on both the inside and outside. It's because of this process that F4 Customs stands out from the others.

Further, the reason the windshields don't shatter or break when hammering them is that they're made of polycarbonate and not acrylic, which will easily shatter. Many other Harley windshields are made of acrylic.

This baked in hard coat process also offers a rain-shedding ability and the rain blows right off the F4 Customs windshield while riding.

Understand, the F4 Customs Windshields for Harley are not scratch-proof but rather, scratch-resistant.

The F4 Customs Windshield for Harley is manufactured from the highest optical-grade polycarbonate, ensuring perfect visibility and protection. Some other aftermarket windshields have all sorts of curves and flares on them. When looking down through them at lower speeds, the road, hazards, and painted lines become visually distorted. This is not so with the F4 Customs as it's a standard windshield.

At normal road speeds, those other flared aftermarket windshields are often fine as you're likely looking over them and not through them. It's at the lower speeds and when having to look down when this visual distortion comes into play.

At the top of the F4 Customs windshield is what they call a re-curve, meaning it flips forward and up. This pops the wind right up over your head, minimizing head buffeting. The 8″ light tint version worked perfectly for me at 5′-08″ tall. I am loving it! 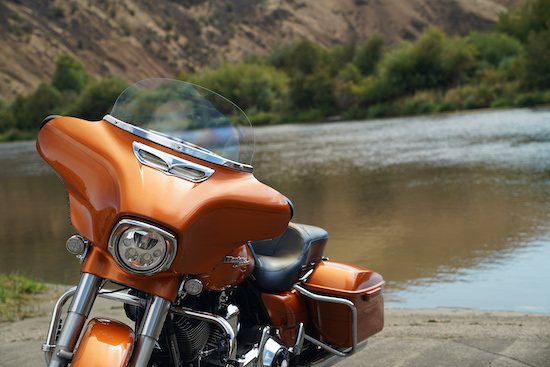 Amazingly, F4 Customs actually encourages you to clean your windshield with regular glass cleaner and paper towels! This is unheard of with other aftermarket windshields for Harley. Most of them strongly advise against this, stating it will leave swirl marks. The others advise you to use only micro-fiber cloths and special plastic cleaners.

F4 Customs advises to not use wax-based or oily-type polishes or cleaners as it will inhibit optical clarity and the rain-shedding ability of the windshield. It won’t cause harm but may produce a light film that could be hard to remove. You should also not use micro-fiber cloths as they can retain sand or grit particles, causing damage.

There are many options for you to choose from based on your needs. F4 Customs Windshields for Harley's offers a range from 4″ to 15″. You can get the 4″ to 10″ versions in light or dark tint. The 12″ and 15″ only come in clear as you'll be looking through those and not over them like the shorter versions.

Get an F4 Customs Windshield for Harley instead and get to riding! No more worrying about scratches, swirl marks, or breaking with the F4. This is a rugged windshield that will last you for many years.

No more carrying special cloths and cleaners like you do for those other aftermarket windshields. 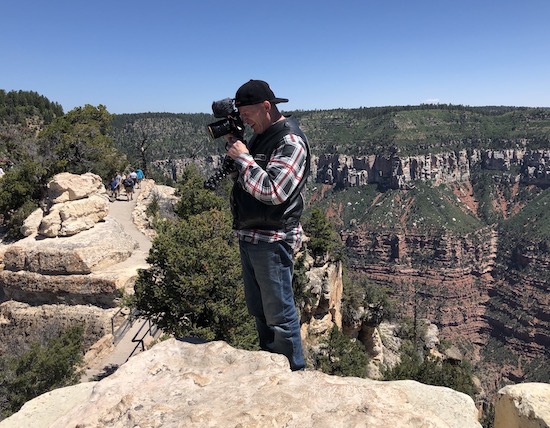 This is my 5th motorcycle documentary film and I wanted to take you behind the scenes. I share some of the things I go through as a creator during these large projects. Although it’s a ton of work, it’s very rewarding when I’m finished and can release these to the biker community. Creating motorcycle documentary films are passion projects for me. These projects allow me to be as creative as I want and on my terms. 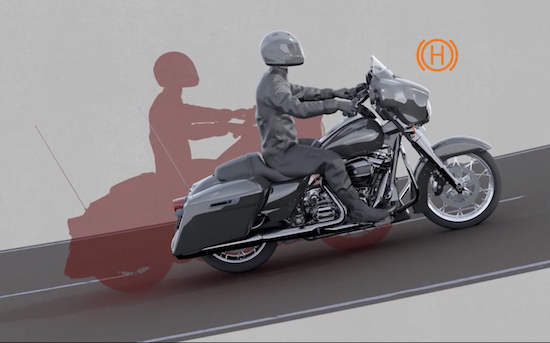 The new Harley-Davidson 2020 models are coming with the Reflex Defensive Rider System (RDRS) as a $995 option for the touring line-up except for the Electra Glide Standard. RDRS comes standard on the Livewire, Tri-Glide Ultra trike, and all CVO models. 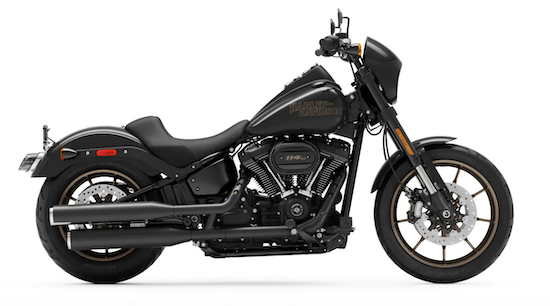 Harley-Davidson just released their new line-up and models for 2020. The show steeler is the new Softail Low Rider S with the 114 Milwaukee-Eight engine. It's a light little bike, 650 lbs, with a powerful motor. It has an adjustable mono-shock in the rear with inverted front forks up front for added handling and performance. It also has dual front disc brakes. They reduced the rake by 2 degrees for added handling. (see video below)

They are also working on the new concept and future bikes. The Pan America will be their first adventure-style bike and the Streetfighter is a future sport style bike ready to carve up the streets.

In this video, I break down the 2020 Harley line-up and tell you what you need to know as a consumer. 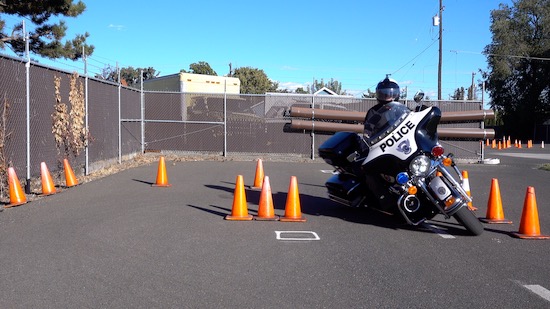 In this video, I give you a very thorough look at how my 2018 Harley-Davidson Police Edition Electra Glide is equipped. These Harley Police models come from the factory with red and blue lights, siren, and special switches for operation such. When a particular law enforcement agency gets the Harley Police Model then it is up to them from there to set it up in a manner that best suits an officer’s needs. Computers, printers, modems, extra battery and more can be placed in the trunk. Rifles and other equipment can be placed in the saddlebag or on mounted on the outside of the Police Harley model.

Paint schemes and graphics also vary from police agency to police agency. The Police Harley Electra Glide is really a stripped-down version of a Street Glide. There is no stereo in the dash and just a storage box instead. We mount a police radio in that spot. Our police radios connect to our helmet microphone and speaker system via Bluetooth. I hope you enjoy this video and get a real in-depth understanding of how a Police Harley Electra Glide is equipped and functions.