Note: Law Abiding Biker™ Media is not recommending you use any oils in your Harley engine that are not officially approved and/or recommended by Harley-Davidson. We are only relaying information that is known to many in the biker community. You are solely responsible for what you decide to do to your bike. 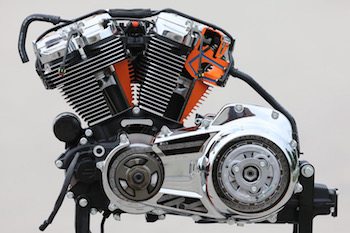 Podcast-Okay, so you're out on a motorcycle road trip and don't have any synthetic oil or “approved” oil for your Harley-Davidson, but need some suddenly. There are no close stores for motorcycle oil, but the local truck stop has heavy duty 15W-40 diesel oil available. Can you throw some of that into your Harley motor and be on down the road? Maybe you are you on an extreme budget and can't afford full Synthetic motorcycle oil, such as 20W-50 Amsoil, which we use here at Law Abiding Biker™ Media in all our bikes.

Oscar is on a mic during this episode and I get to ask him a bunch of technical questions. As you all know by now, Oscar is a wealth of knowledge and my beloved resource when it comes to motorcycle oils and used oil analysis (UOA). We use Black Stone Lab for all our UOA's.  You'll have to listen in to get all the details on this topic as Oscar spills his knowledge!

Like a diesel engine, a Harley engine is classified as “heavy duty” use. So, many of the additive packages they put in the oils are very similar. If you're going to do this, our suggestion is to at least use full synthetic 15w-40 heavy duty diesel oil.  Again, we are not actually encouraging anyone to put heavy duty diesel oil in their Harley. Always check with your local Harley-Davidson dealership mechanic for advice.

There are many bikers out there that swear by using heavy duty diesel oil in their Harley. Big Daddy Kane here at Law Abiding Biker™ Media has also done it before in the past. Just know that Harley-Davidson recommendations are different and you definitely could have warranty issues should they discover it. If you're not under warranty then heck, do what you please at your own risk.

Our personal take on it? Oscar and I are going to continue using full synthetic 20W-50 Amsoil in our Harley-Davidson's as it's approved and we love it. I'll spend almost the same amount of money buying full synthetic 15W-40 heavy duty diesel oil anyways. But, if you're using standard (non-synthetic) 15W-40 heavy duty diesel oil then you can go real cheap.

Thanks! I was scheduled for an expensive dyno tune at Hammer Performance here in Sandpoint (great bunch of guys), but I watched your post re Vance & Hines' FP3. Cancelled the dyno thing, ordered the FP3, and installed it today. Cleaned my 15 Road Glide Special right up. Amazing piece of work. Bought the bike off the showroom @ Lone Wolf, had a stage one put in first thing, and it never would run right. Had them re-tune this spring, but no improvement. Did the FP3, ran a 45 minute map run, zapped it, and fell in love with my bike all over again. The dyno tune at Hammer and the FP3 were basically even money (actually Hammer had the potential to be quite a bit more), but with the FuelPak I can keep tuning indefinitely. As you can see from your roster, I support what you're doing. Keep it up! 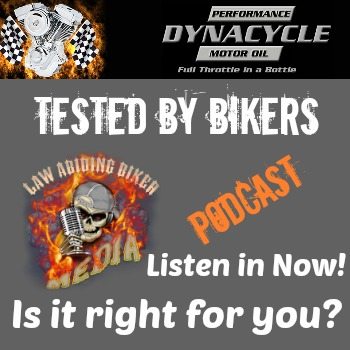 In this episode we talk about Dyna Cycle Semi-Synthetic oil we recently tested. The company sent us some oil earlier in the year asking us to check it out. So, in true Law Abiding Biker Media style we went full throttle at it. I put Oscar as lead on the project and he is on the mic in this episode to tell you everything we learned. Oscar is a wealth of knowledge on oil and oil testing.

This episode is packed with useful information for the average day to day biker out there.  Oscar has useful tips he shares that all bikers can benefit from. You can learn a ton about what is going on inside your motorcycle engine with fairly affordable oil testing.

We tested Dyna Cycle oil in one Harley and Amsoil in another. Both bikes have the same motors, were riding the same distance, and in the same environments. Oscar gets into more depth about how the tests were initially set up. Oscar took oil samples before and after our tip to Sturgis, SD this year and sent them off to Black Stone Lab, whom are a completely independent Lab. The results are listed below in .pdf's, so take a look if you like. You'll need to listen in to fully understand the results, but we wanted to make them available.

Listen in to this podcast episode to find out which oil we are going to use in our bikes here at Law Abiding Biker™ Podcast & Media!

LAB media was approached by Dynacycle to test their motorcycle oil, a semi-synthetic 20W-50.  The timing of the request was ideal as we would be riding to the annual Sturgis motorcycle rally in the summer.

We are often asked which oil is the best.  While we all have our opinions, some stronger than others, we can pick the oil that is best for us.  How do we do that?  One of the best ways to determine how any particular oil works for you is by used oil analysis (UOA).  A lab, in this case Blackstone Labs, can test a sample of oil and tell you important facts about it.

This is precisely what we decided to do when Dynacycle approached us.  Put Dynacycle and Amsoil in two bikes, ride them to Sturgis, and report the results when we returned.

Both bikes were to be ridden in the same trip, approximately the same number of miles in the same environmental conditions.  As we rode in a group we were able to ensure that the bikes were in the same conditions, ridden at similar RPM’s and speeds.

We approached this from a consumer’s standpoint, not necessarily a scientific one.  While we kept conditions similar we also recognize that these bikes are made to travel long distances with gear and passengers and thus minor differences in weight, speed and such were not necessarily important (though in the true scientific tradition they would be tightly controlled, here they were not).  From a consumer standpoint the minor differences in these bikes, and many bikes, are not remarkable.  We are riding consumer bikes, not custom built, high horsepower, high torque bikes made for racing.  We expect that anyone reading these results could extrapolate the information to their own, similarly equipped, consumer style bike.

Both bikes were ridden to operating temperature at the same time on the same date to a location where the fluids were changed.  The Limited had all three fluids changed – Dynacycle in the engine and Amsoil 20W-50 MCV in the primary and transmission.  The Street Glide had fresh Amsoil MCV in the engine.  The Street Glide had relatively new (about 1,000 miles) transmission fluid and primary fluid (Amsoil MCV) and thus were not changed.

Samples were taken from the engine oil at drain for each bike.  The oil was allowed to drain for two seconds prior to filling the drain bottle.  These samples were labeledand stored in a temperature controlled garage for later analysis.

Again we approached this from a consumer standpoint.  Neither brand’s website required a “flush” procedure to produce the stated results so neither bike was flushed. This means that a small amount of whatever oil was in the bike prior would be left in it.  In this case Amsoil MCV was in both bikes prior to the test.

We rode from Yakima WA to Sturgis SD covering about 2800 miles for the round trip.  We experienced temperatures over 100 deg F, rain, wind, freeway and stop and go traffic.  The ride and Sturgis experience was fantastic.

You can see the attached used oil analyses from Blackstone Labs.  We used Blackstone as they come highly recommended from a variety of sources, are reputable and professional and their results are easy to read.  In this case we can make comparisonscomparison’s not only between bikes but also within bikes.

You can see that some concerning trends showed up with the Dynacycle oil.  The only true way to confirm these trends is to change the oil back to Amsoil MCV and see if the trends continue.  We will post another UOA from the Limited after another 5000 mi, sometime next summer.

You can see how important a UOA can be for your own bike.  Narrow your search of oils down to one or two, use it and get an analysis done.  The analysis will tell you if the oil is doing what you expect it to.  In the case of the Limited we will not only post the next UOA but one after that, taking the oil out past 5000 miles.  We will see how the Amsoil does, though we expect excellent results.